Posted on January 20, 2011 by Cutting Loose Leave a comment 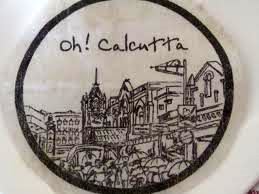 For long at the mercy of friends (some of whom have now moved overseas) for a dose of mutton razala or shorshe maach (fish prepared in mustard sauce), the coming of Oh! Calcutta to Delhi was a tongue-tingling piece of news. Housed in the International Trade Tower at Nehru Place, Oh! Calcutta is all about fine dining. Elegant interiors, dim lighting, soft music, knowledgeable staff and exemplary service, all come together to fête the cuisine of Calcutta. A delicious mélange of the produce of European pantries and Bengali kitchens, the informed suggestions were remarkable in variety and flavour.

One of the starters came in the form of banana-leaf wrapped prawn and crabmeat dumplings, called chingri kakra bhapa, steamed after marinating in mustard paste. Simply superlative! The other one was mochar chop, a deep-fried crunchy cutlet made of banana flowers, potatoes, green chillies and spices. The accompaniments were unique and many—aam angoori chutney, a paste of raisins with mango pulp; sweet curds and cucumber dip; small chunks of fried moong dal; a tamarind and mint chutney; and, a paste of mustard with tomatoes softened in the tandoor.

The main course consisted of Railway Mutton Curry, a nostalgic recipe, dating back to the 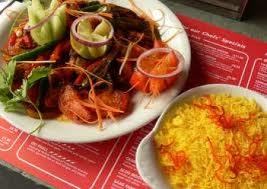 railway canteens of pre-independent India. Stewed with onion, ginger, garlic, cumin and roasted coriander, it was, however, the coconut milk and tamarind pulp that gave it its unique taste. A customary fish preparation, in the same course, included a steamed, boneless bekti, marinated with (what else!) mustard paste, green chillies and coconut; also dressed in banana leaf, it went by the name of bekti maacher paturi.

For the vegetarians, we were recommended a ridge gourd and potato dish. Called jhinge aloo posto, it was cooked in thick poppy seed gravy and flavoured with green chilles and kalonji. A side dish in the form of a simple mustard curry to go with the rice was a popular choice, pungent though it turned out to be, beyond imagination. A typical bread form called luchi, akin to small bhaturas, helped in swiping clean the last morsel of the delectable repast. Mishti doi, rosogolla, sondesh and the usual hangovers from the Raj—caramel custard and bread pudding—made up the sweet end of the meal.

After having relished my food, I proceeded to (with scant regard for social etiquette) visually devour the food on other tables. It was also an attempt to take my mind off the effect of flaming mustard on my taste buds, even though the beer was trying its bit. I recognised the Mulligatawny, the Stroganoffs, the kebabs and prawns in myriad avatars, including a pulao, poetically named chingri morich pulao. Going by the presentation and the aromatic whiffs emanating from these tables, I’m certain they would have been as good to the taste.

I hope to find out firsthand soon enough.