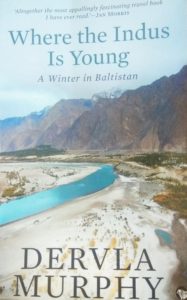 A cycling buff since childhood, Murphy pedaled to and from and across Europe a number of times, unable to spare time for lengthy sojourns from ministering ailing parents. Following their passing, she made her first long journey through Europe, Turkey, Iran, Afghanistan, Pakistan and into India in 1963 at the age of 32, a good many years before the Hippy Trail was to take firm shape. Her letters to friends back home formed the basis of her first book, Full Tilt. It was on that trip the idea to winter in Baltistan germinated in Murphy’s curious mind. And so, a decade and some years later, in the December of 1974 she flew to Pakistan with her young ward and waited out inclement weather in Rawalpindi before making the short flight to Gilgit. Subsequently, they trudged southeast to Skardu halting at remote snowbound hamlets banked along the Indus en route, veering east along the Shyok to Khaplu before heading northwards to the Hushe valley over treacherous glaciers. Their attempt to visit Aksole via Shigar on the return journey does not, however, fructify and they re-trace their tracks from Yuno.

Where the Indus is Young’s particular charm lies in the knowledge that this excursion was attempted by a woman, now 86 years of age, in times when solo women travellers were a rarity. And that she has penned over 20 books about her pedaling peccadilloes around the world, the last of which she attempted well into her seventh decade. The book though is clearly not a page turner and will hold greater appeal for hardcore travellers, adventurers and vicarious pleasure seekers. Lovers of language and story-telling are likely to be left wanting. Recounted in a matter-of-fact tone, the unpretentious narrative is peppered with anecdotes about the people Murphy encounters during her travel and stay in Baltistan. Indifferent officials, cooperative army personnel, erstwhile nobility, impoverished souls, xenophobic villagers and friendly mullahs; they all find place in her account. The author’s diligently kept diary includes vivid descriptions of events that they chance upon for the first time, such as highland polo and Muharram processions. Also described in riveting detail is the gob smacking lunarscape, reminiscent of Trans-Himalayan cold deserts, swathed in shades of tan and white.

There is, however, woeful little reference to historical context, or current affairs. Other than a mention in passing of Prime Minister Zulfikar Bhutto, her friendship with Miangul Aurengzeb, the son-in-law of deposed President Ayub Khan, an attempt at explaining the longstanding Shia-Sunni conflict and an allusion to the 1971 war with India, Murphy’s observations mostly remain untouched by matters affecting Pakistan at large. This is not necessarily off-putting, as the propensity to disconnect with the Outside, as Murphy calls it, is an affliction peculiar to those habitual of long durations on the road. Besides, nature of the magnitude she came upon clearly demanded complete mindfulness. That, after all, is the whole point of travel.