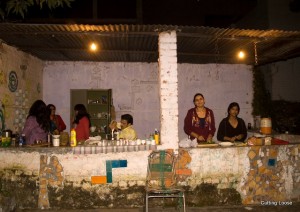 Here was an activity that may not require fancy dress nor immunity against masala-rich multi-cuisine, I told myself, when an SMS invited me to attend the Second Garage Film Festival at the Cafe Kaffee Kuchh. After a bout of big fat Punjabi weddings and festive parties, it was a well-appointed decision. Mini thought so, too.

The scene at Lajpat Rai Bhavan in Sector 15 on Sunday evening was one of unpretentious casualness, creativity and bonhomie. Volunteers bustled around preparing and serving beverages to shouts of do chai, saat 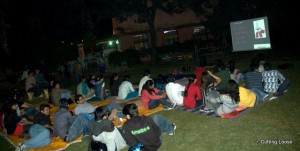 coffee and sandwich! How they identified the voices in the dark is a marvel. The crowd  swelled even as professional and amateur film-makers went about testing equipment, readying to screen their films. Following which they would engage with the audience and each other for feedback. The themes of the short films were varied; some shoddily presented, some brilliant; some amateur and some technologically superior. Yet they all smacked of activism, the hallmark of youthful earnestness. 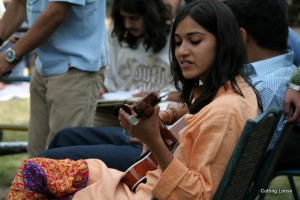 The sudden coolness of the evening had us heading straight to the counter for our cuppas during the ‘interval’. Sukhmani, coordinator and minder of cafe that evening filled us in on recent activities while regretting the frequent breakdown in infrastructure (read electric kettle). For the uninitiated, each Sunday a non-profit activity is hosted by this community cafe run entirely by volunteers. For the past couple of years this has served as an alternative space for creative buzz: poetry reading, storytelling, jam sessions, art shows and a delightfully named fair for kids, jhamela. 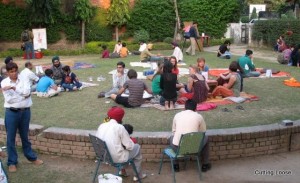 by her visit to the SEWA Cafe at Ahmedabad. At the end of each session empty envelopes are passed around for contributions for the next event. It is not mandatory but since someone’s generosity has already paid for you previously, you give happily. There are no prices listed and it is entirely up to your wallet. Mini and I rated the time spent with the volunteers and participants of Cafe Kaffee Kuchh as one of the happiest in the recent past. We couldn’t have found a better place to “explore the sublime art of hanging out”.