Here’s a recent tete-a-tete that demystifies writer, blogger and fellow-wanderer, Dr KJS Chatrath. It appeared in The Tribune, today. 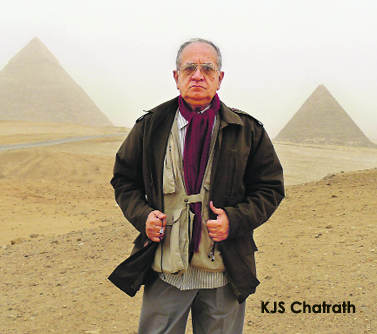 He worked for the Indian Administrative Service before retiring as the Director General of Odisha’s Administrative Officers’ Training Academy in 2003. He also holds a Ph.D. from the University of Paris for his thesis on “Indo-French Diplomatic Relations”. An admirer of France since his schooldays, it was his initial fascination with the nation’s postage stamps that eventually led to his “long love affair with all things French”. This affair has left the literary world richer by a number of books, mostly on Indo-French interface: The Foreign Policy of France, India in the Debates of the French Parliament: 1945-1988, Ver la Lumiere: A Study of the French School System, France – A Brief Bibliography, A Glance at France and The French Collection.

He boasts another singular, some would say morbid, interest in colonial cemeteries. This matter of the European graves, too, has a French connection, he quips. “I was visiting Pondicherry and took time to visit the cemetery there. This interest gradually developed and has entered the stage when the first place that I look for in a new town is the oldest cemetery!” This curiosity has resulted in yet another book, The Last Post, a selection of inscriptions on French graves in India.

One wonders which one of the aforementioned avatars is the most gratifying for him. “Oh travelling is what I really love. I was not enthusiastic about joining the Civil Services right from the beginning. In the end, 36 transfer orders in 36 years of service made it clear to me, and to the service, that we were not made for each other. In fact, one of the things that I resented in the service was the restrictions that it put on my travelling.” He has travelled quite extensively in India and abroad, notably to the Arctic and Antarctic Circles, Machu-Pichhu in Peru, and the pyramids of Egypt; he has travelled alone in the Patagonian region of Argentina and Chile, as also the European continent: all after turning 50.

An offshoot of this love for travel finds Dr Chatrath, fast approaching his seventh decade, on the trekking routes of the Himalayas often enough. He has trekked to Gomukh, Yamnotri, Valley of Flowers, Hemkund Sahib, Kidarnath, Purana Kidar, Har-Ki-Doon, Dodital and up to a little short of the mysterious lake Roopkund. He firmly places the blame for this wanderlust on his genes, even as he gushes on about his most recent visit to Greenland and Iceland. “My father was an avid trekker and so is my son. He, too, has inherited a passion for travel and is trying to visit every part of India and practically every country in the world.”

Chatrath’s matchless icon is the centenarian marathoner, Fauja Singh, about whom, he remarks, “I admire Shri Fauja Singh ji’s endeavour to get the best out of the given set of circumstances. I am reminded of the following lines from Robert Browning’s Rabbi Ben Ezra: “Since life fleets, all is change; the Past gone, seize to-day!”