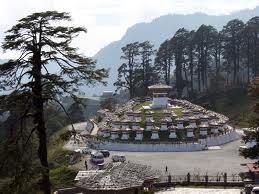 This entire year gone by, I realise, has been about Himalayan mountain passes. Starting with the Dochula at 10,400 ft in Bhutan, a mere 30 kilometres descent away from the capital city of Thimpu. Usually covered in clouds, it decided to behave as I screeched around a large roundabout entirely covered in chortens (a 108, I learnt later), before grinding to a halt at the spectacular views around me.

One of the laggards as part of a car rally, I gave up clocking points a long time ago, a small

price to pay in exchange for the beautiful surroundings I could savour at leisure. The road through this pass, unlike its Indian cousins, was tarred, smooth and broad making the drive a treat for those traveling between Punakha and Wangdi. 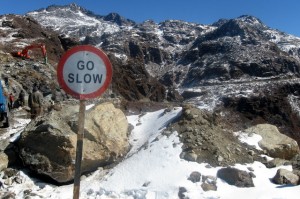 On my return to India, I followed it up by a visit to the Nathula in Sikkim. An important trade post of the ancient Silk Route, this pass at 14,140 ft has re-opened for trade between India and Tibet less then a decade ago. Not too far from Gangtok at 6000 feet, yet the steep 45 kilometres drive on narrow hair-pin bends on barely metalled roads is a test in resilience.

However, the panorama unfolding as you approach the snowline, and beyond, is well-worth 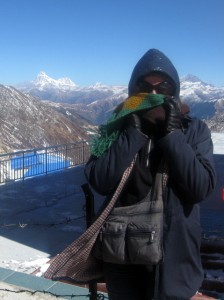 every skeletal rattle. Paralysingly cold, high velocity winds threaten to pole vault you into Tibet if you’re not careful. Not a difficult feat given a low barbed wire is all that divides the check posts between both nations, their flaming orange structures a beacon amidst the snowy backdrop.

Another few kilometers away from here lay Kupup, the very location from where Francis Younghusband launched his successful military expedition to Tibet in 1903. His track runs through the 18-hole Yak Golf Course certified by Guinness World Records as the highest course in the world at 13,025 ft. Not far is Lake Kupup which along with Tsongmo Lake, located mid way between Gangtok and Nathula, is one of the prettiest high altitude aqua bodies I have seen till date. 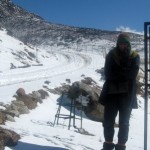 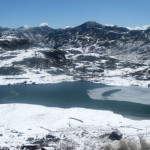 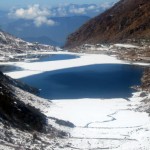 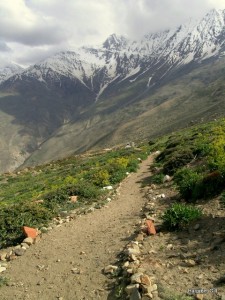 Shipkila in Himachal Pradesh was another important border post on the Indo-China trade route although hardly any activity is witnessed here presently. Shipki, once the last village of Kinnaur on the Indian side but now in the Tibetan Autonomous Region (by choice) is also the point where the mighty Sutlej enters India. This visit came about as part of the spadework for my forthcoming book on the Old Hindustan-Tiibet Road. You will read more about this in there, of course.

Work over, my friends and I treated our selves to a trip through Spiti valley arriving in 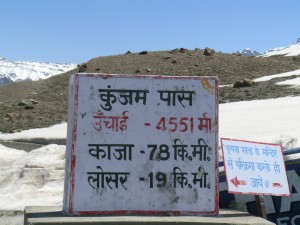 Manali a few days later via the Kunzumla at just under 15,000 ft. The drive through here rendered us girls completely speechless. You will have to experience it yourself to understand why. The drive to Rohtang at over 13000 ft was relatively tame in comparison even though our approach to the top gave us some nail-biting moments. 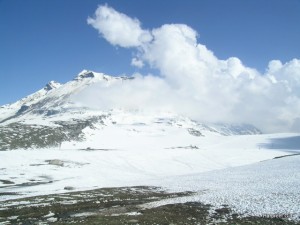 This was the heavenly view as we approached Rohtang Top from the Gramphu side. Then, as we descended towards Manali the most jarring sight greeted us. It seemed like the circus had come to town…