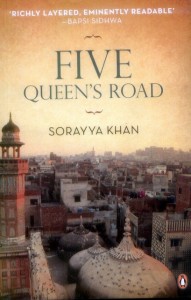 A grand old mansion, Five Queen’s Road, once owned by an Englishman in the fashionable pre-Partition Lahore, is at the heart of the author Sorayya Khan’s book by the same name. She deftly weaves family saga and national history in this moving account of political upheaval and migration.

Defying logic, misgivings, good sense and advice, Dina Lal, a die-hard Lahori, purchases said house in 1947 from its departing owner, despite the carnage on the streets. He refuses to leave his beloved Lahore for presumably safer environs. Hoping to shield himself from the ongoing mayhem, he converts to Islam and takes in a Muslim widower, Amir Shah, and his children, Javid and Rubina, as tenants. As things go, neither of these efforts prevents his wife from being kidnapped by marauders; turning Dina Lal, as a consequence, forever against Shah, as well as, the city he chose not to abandon.

Despite palpable hatred between the two central characters—though they rush to defend each other in times of crisis—a surreptitious friendship develops between Dina Lal and Javid. It remains unchanged till such time that Javid’s Dutch wife, Irene, herself a victim of traumatic memories of World War II, joins the household a decade later. A survivor of war-stricken Maastricht and Amsterdam, Irene arrives fighting her own ghosts. Wittingly, and through encroachments by shop owners, the boundaries at Five Queen’s Road are once again redrawn, taking the long-nurtured feud to a different level altogether. As the story unfolds further, the protagonists come to realise that surviving their own personal tragedies has given them something more in common than was first imagined.

Spanning three decades, Five Queen’s Road, depicts the complex nature of relations between aggrieved mindsets, and documents an important phase of post-Partition history in the subcontinent. When the partition of the Indian subcontinent created two separate countries, India and Pakistan, between 12 and 14 million people left home to cross borders and set up residence anew. Between 500,000 and 1.5 million people died and roughly 83,000 women were abducted, some never to be heard of again. It is this theme that permeates the multi-layered narrative of Sorayya Khan’s second novel.

Reflections on adaptations, mutation, notions of belonging, nationhood, appear close to the author’s heart, as her first novel, Noor, also makes for a remarkable and poignant read about the happenings in East Pakistan during the war of 1971.