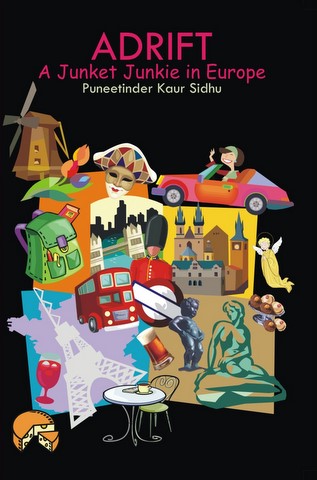 It is a little over a year since I was awash with the euphoria of having been signed up by a publisher for my first book, Adrift. A first-time author is a tough tag to achieve (don’t let anyone fool you into believing otherwise), given how market-driven the unwieldy publishing industry is. And given my choice of genre, travel, even less promising. It has been a lot of hard work, before and after.

Still, it has been fun. Or, so it seems in retrospect. I’m not sure I was amused when some publishers, at the outset, suggested I add ‘spice’ to an otherwise readable manuscript (their words). It was constantly compared with a runaway bestseller (Eat, Pray and Love) minus the carnal adventures. One publisher thought it well within his professional ambit to question: how come you were on the European continent for six months and nobody made a pass at you? If memory serves me well, I think I suggested he wait for my memoirs!

It did not take me long to realize that I was taking many a wrong turn. Six months of constant, albeit polite rejections later, yet unwilling to sex up my manuscript, not for prudish reasons but because the narrative did not merit it, I began my search for publishers with offbeat catalogues. Another couple of months of diligent peddling later, I heard back from one of them. Then, commenced the painstaking process of editing, suggesting, approving, designing and imaging.  Finally, in May of 2010, I was ready to launch.

One more revelation followed thereafter. The publisher’s role in introducing you as an author is limited to ensuring distribution to vendors, and to publications that may or may not review your work. As a reviewer myself, I knew how back-to-back columns of books propped up ceilings in most offices, before finding their way into oblivion. And so began another uphill task, that of marketing my hard work. Something all first-time authors should factor into their post-launch activities. Stagger them, as you will be funding most of them yourself. Yes, another splintered myth.

The last year has been an endless, albeit fulfilling round of calls and meetings with the fourth estate, magazine editors, book promotion agencies, book clubs, bloggers, Rotarians and television channels. And just when I thought I had covered all ground, I chanced upon another novel idea: a book video. Currently in talks with a media production house (watch their feature Neither Milk Nor Yoghurt on NDTV 24X7 this Sat at 3pm and Sun at 1pm), I will soon have one of my own to share with you all…

NOTE: Whoever said writing was tough has another think coming. Looking back, it was the easiest thing I did in fashioning my literary avatar!

PS: Shared an edited version of this post with Chillibreeze.