I am back! Refreshed and rejuvenated from my annual pilgrimage, this time, cleverly coincided with year-end revelry. Not much change was evidenced in the modus operandi of those serving up the customary celebratory rituals, or in those participating in them. In short, we arrived, we drank, we ate, we drank, made merry and then drank some more. Mostly, from fixed perches around large crackling bonfires till it was time for departure three days later. 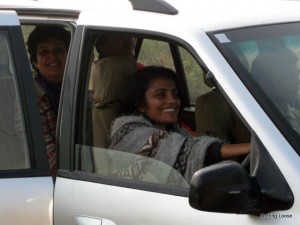 A reunion of sorts, of friends who hadn’t seen each other in some years, there was a lot of 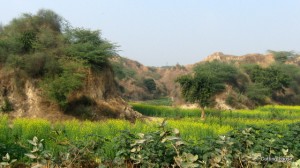 catching up and dressing down to do. (You know, the stuff you don’t put on Facebook). Still, a few of us managed to salvage some time for exploration and drove to a place called Pinahaat.

On an earlier trip many years ago, as a marshal of the Chambal Rally, I recollect resenting that I could not take in at leisure the feral beauty of the terrain we bumped through and over. I recollected,too, that the dusty deep ravines covered in thorn forests as a backdrop to the yellow and green of mustard fields had presented an indelible study in contrast. It was time to go back for those pictures.

This historically rich region is located on the Uttar Pradesh side of the state border with Madhya Pradesh, and was once the largest trading point for pina (fodder supplement); a cake-like formation after oil is extracted from mustard seeds. Hence the name: a derivation of Pina-ka-haat.

First colonized by the Tomar Rajputs when they fled Delhi, this region was subsequently 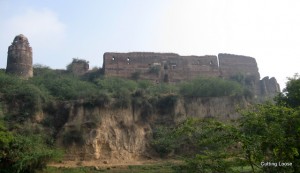 ruled by the Chauhans, the Badhawars, Marathas and finally the British. Today, the proud old fort at Pinahaat is completely over-run by encroachers, its crumbling remains increasingly neglected and ignored. 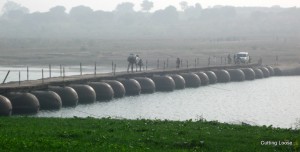 This is also the place where the last serving pontoon bridge connects the two states across the River Chambal. Controversy-ridden, it will soon disappear if the environmentalists have their way as bridges such as these have irreversibly disrupted the ecology of the river. Wherein the number of muggers, ghariyals and Gangetic dolphins has alarmingly diminished.

there now that the river has been declared a National Sanctuary. However, I confess, it was these very images that had brought me back for more.

The sight of all manner of traffic unhurriedly making its way to and fro. 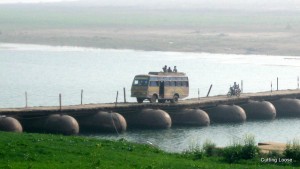 The calming flow of the river.

The ubiquitous temples, one tilted and half submerged, the other watching over.

The towering steel and concrete structure an anachronism, almost, in a place where time seems to have stopped still. 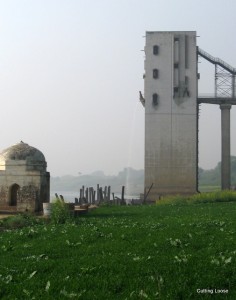 And fields, glorious fields. They do make for a pretty picture, don’t you agree? 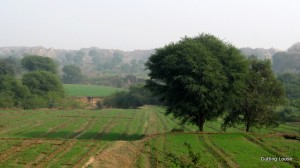