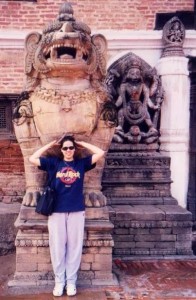 Bhaktapur, the ancient capital of Nepal, and the third largest city in the Himalayan nation was next on our itinerary. Untouched by modernity and preserved in its pristine form, it is a veritable open-air museum housing traditional art and architecture, magnificent temples, historical monuments and craft works. Fortunately the rain held and after a couple of hours of taking in the beauty of the sculptures here, we set off for Bodhanath, one of the holiest sites for Buddhists in Nepal.

By virtue of its location on the ancient trade route from 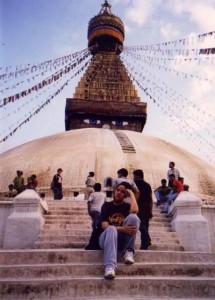 Tibet, merchants have been offering prayers here for centuries. The Bodhanath stupa is considered one of the largest in the world, its spherical shape dominating the skyline just outside of Kathmandu. In need of a warm shower after alternating between soaking wet and wind-blown dry (courtesy that broken car window, remember?), the hotel was our only succour once we wrapped up our visit to the stupa.

Relaxed, refreshed and rejuvenated post a sumptuous Italian meal, our restless selves decided to visit Kathmandu’s celebrated casinos. People travel to Nepal for numerous reasons, and one of them has been to play in the casinos to try to get lady luck to smile at them. Exactly our sentiments when Richa and I headed off to experience some fun and games at these dens of hope open round-the-clock. 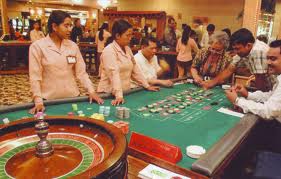 It didn’t take us long to surmise that zero knowledge and even less experience is nigh impossible to overcome in a single night, despite a number of attempts at baccarat, blackjack, flush, pontoon and roulette.              Our one

recourse was the slot machines section. With no-one monitoring that area we ran amok, taking on every machine lined up in the room. During just such an attempt, one of us bumped into its large frame, causing the coin to slide gamely onto the lever that disgorged a large quantity of shiny Nepalese coins. Thereon began a devilish exercise of nudging, pushing, shoving, kicking and thumping of the machine, eager hands cupped together to receive our dubious winnings. Except for one tiny hiccup: CCTVs. Fifteen minutes later, suitably reprimanded and divested of their bounty, two chortling girls were politely escorted out.

Early morning found us at Pashupatinath Temple. Not so much to cleanse our ‘sins’ from the previous night but to experience Nepal’s oldest Hindu temple dedicated to the national deity Lord Shiva. This UNESCO World Heritage Site, located on the banks of River Bagmati, permits only Hindus (read nationals of Nepal and India) to enter its premises. Non-Hindus are allowed a look-see from across the river. Paler skinned than dusky Indians, I, too, was subjected to much questioning; eventually being let in while a suspicious priest kept a keen eye on my whereabouts.

Lunch was a quick bite at Thamel, the touristy haven for

low-budget travellers, while we waited for the Buddha’s Eyes to be embroidered onto our T-shirts. Leaving us just enough time to drop into the Singapore Airlines Office to put faces to voices and names we had so far communicated only telephonically. We returned to the hotel soon after to complete check-out formalities before heading back to the airport just as the mildly sunny day became overcast once again.

Hard as I try, I can’t seem to recollect disappointment of any kind at our little touristy adventure. Then again, nothing seems to have left a lasting impression on me. Funnily enough, my food-crazy self has no memory of extraordinary cuisine experiences either. Ergo, this visit to Nepal is going down in my travel memoirs as a mere weekend getaway, splendid promotional deal notwithstanding. Also, that was the last time ever I chose a hotel property as a destination, with nary a thought to climate and purpose of travel. I have learned to choose smart, have you? 😉