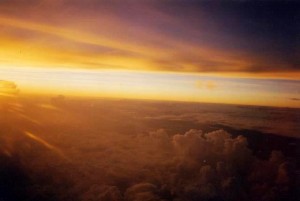 Looking back, my visit to Nepal was a befitting what-not-to-do lesson. That my friend Richa and I, both travel-crazy colleagues at Singapore Airlines, had a reasonably splendid time learning it, regardless.  With the oppressive mugginess of a Delhi July beating down on us, escape, however brief, was our only mantra. In the midst of this rant came an announcement by a friend working with the Radisson Hotel: the inauguration of a new property in Kathmandu. And weekend promotional deals were up for grabs.

A fortnight, much wheedling and some cajoling of bosses later we were up, up and away; 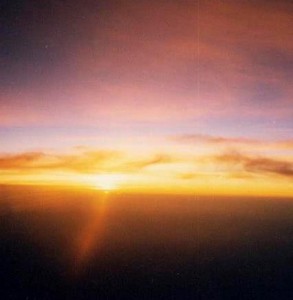 straight after work, having managed the requisite permissions for gratis travel on Royal Nepal Airlines. The airplane pierced through dense clouds to afford us the most beautiful vision of a surreal sun setting over Delhi. That was the last bit of sun we would see for the next 24 hours; practically three-fourths of our time in Kathmandu. An hour and three quarters later, we dived back through thundering, dense and rain sodden clouds to touch down at the Tribhuvan International Airport to a torrential welcome. 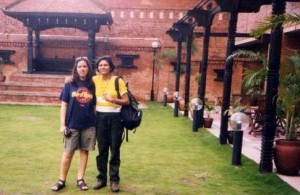 that tiny detail to dampen our holiday spirit a wee bit. Rising early, we breakfasted and gave ourselves a grand tour of the hotel before excitedly waiting for the promised Mercedes to fetch us for our excursion to Nagarkot and Bhaktapur.When it showed up, it was not the gleaming metal being we had envisioned; but a rusted, beaten down version of unknown vintage. 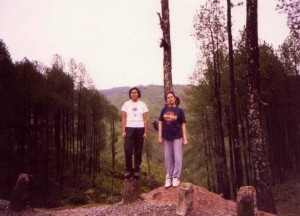 Eager to begin our day we hopped in; to the sound of bottoms impacting squidgy wet seats! Torn too! The straw-like stuffing pinched uncomfortably each time we moved. With no substitute in sight, we drove off anyway, grumbling all the while at clever marketing jargon. That was not all. The window wouldn’t roll up. Something we discovered when it began to drizzle soon after. 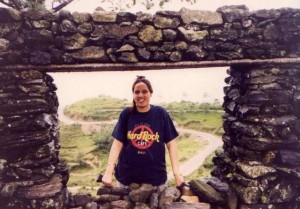 We continued to retain our sunny mood, nevertheless, as we climbed the thirty-odd kilometres to Nagarkot. One of the most scenic spots northeast of Kathmandu, it supposedly provides a spectacular view of Mount Everest and other lesser Himalayan peaks. On a clear day. 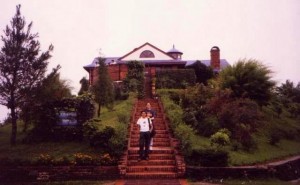 What we found, instead, was a quaint tea house in red-brick with a blue roof, enveloped in green foliage and a haze of white mist.

And frames upon frames, of truly breathtaking pictures of the view we were missing, lining its walls. (…to be continued)