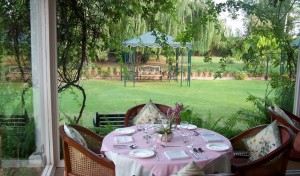 Celebrations on the personal front (which, pointless to add, always include eating out) will find me at my most preferred destination: Whispering Willows just outside of Chandigarh. A multi-restaurant option, attempting to offer authentic dishes from a multitude of cuisines (as opposed to a multi-cuisine restaurant) coupled with personalised service and an equally elegant ambience combine to provide you a complete fine dining experience. An experience, sadly, found wanting in most other stand-alone establishments excepting the odd family-owned one.

Having exhausted the entire menu in the Mediterranean section, more than once, on this occasion, we voted to step back in time for some flavours from the colonial era. Spread around a parlour-like room, replete with cheery chintz, with its very own tiny fireplace, and a glazed veranda lined with wicker, we began our evening, but naturally, with a couple of spirited rounds. As we munched on masala peanuts for starters, and contemplated between Railway Lamb Curry and Dak Bungalow Chicken, I wondered at the delightful nomenclature and how it came about…

As a result of the inter-mingling of European races with Indians since the 16th century, a multi-racial community evolved and came to be called the Anglo-Indians with a distinctive culture of their own. A cuisine to match was not far in following this evolution. A cuisine, which borrowed the best of both worlds and spiced up the normally bland English Roast, as well as, tamed the fiery Indian Curry. 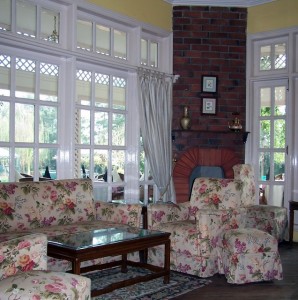 centuries as its own. A derivative of the Portuguese term Vinha de Alhos meaning a dish made with wine and garlic, it was once a watery meat stew, till it was re-invented with chillies and spices as essential ingredients. It is now ranked as the spiciest and most popular curry dish all around the globe.

A Railway Mutton Curry is also a throwback to the times when travelling by rail was considered aristocratic. It was served in Railway Refreshment Rooms and on trains covering long distances. This slightly spicy curry was usually accompanied by bread or dinner rolls and kept for long periods of time due to the use of vinegar or tamarind.

Dak Bungalows or rest houses for British officers on duty dotted the country during colonial times. The chicken or meat curry prepared by cooks at these bungalows depended on the availability of ingredients in a particular place, resulting in varied flavours. Accompanied by vegetables, rice or bread, it remained a favourite with visiting officers, nevertheless.

Another example of a gradual assimilation into the Anglo-Indian cuisine was that of the Tamil ‘Melligu-Thani’ meaning, literally, pepper-water. With the addition of ingredients such as coconut, meat and spices, this soup not only acquired an altogether different avatar, it also reached a level of popularity never achieved before throughout the colonies. It no longer bore any resemblance to the original and we now know it as the Mulligatawny Soup.