Ever since I learnt of this trip, I have been meaning to experience this train journey and all that it offers, first hand. Alas, a year has whizzed past and I am nowhere close to the Safdarjang Railway Station (the take-off point), leave alone Nirvana! Instead, I have sneaked away a detailed travelogue posted by friend and fellow-wanderer Dr KJS Chatrath on his website, 50+ Travels. 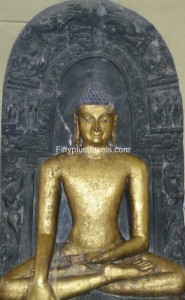 I took this trip from 22nd to 28th August, 2011 and would like to share my experiences with readers. This train starts from Safdarjung Railway Station in New Delhi. A few of the taxi-drivers or auto drivers may not know the exact location as it is a station which hosts very few trains. It would be helpful if the IRCTC provides a sketch map giving directions on how to reach the Safdarjung Railway Station. Anyway my auto driver did know the exact location and I was there almost 3 hours before the schdeuled time of departure.

There was a pleasant festive atmosphere at Safdarjung railway station which had been decorated with marigold flowers. Each passenger arriving was welcomed with a garland of marigold flowers. Sehnai players were busy filling the atmosphere with sweet sound of music. One no longer felt like a mere passenger but a guest! We were offered snacks, juice, tea and coffee. Check in was smooth and very polite. We were given some detailed documentation about the trip. The air-conditioned VIP waiting lounge at the platform with neat toilet was at the disposal of the travellers. A helper took my luggage to the allotted berth in the 2nd AC bogie by which I was to travel.

From then onwards, it was my home for the next 8 days. The train carriages were as clean as 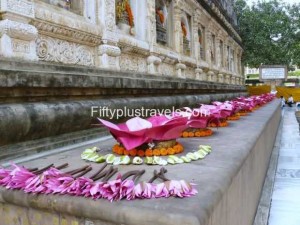 the interiors of a good aircraft and this was scrupulously ensured by a staff member who was present near each toilet during the entire period of the trip. There was a separate neat shower room. A security guard also posted in each compartment to look after the security. The linen was clean and changed every day. Disposable seat covers and good quality toilet paper was available in the toilet. The itinerary was so prepared that after night’s journey by train, next morning one would reach the town to be visited. Bed tea and biscuits were provided at 5.30 am in the train and at 6.30 the guests were all at the platform.

There were three groups with a guide each. The guide and the composition of the groups remained unchanged during the trip. We would be boarding a comfortable air-conditioned bus which would drive us to the designated hotel where rooms were made available- twin sharing or single, as per one’s booking. The choice of hotels was very good. Hotels which we used during the trip were all newly constructed with foreign tourists in mind –with three star comforts, huge air-conditioned rooms with neat and clean bathrooms/toilets.After a bath and change the guests would go to the restaurant of the hotel for breakfasts which ranged from very good to excellent. We were handed drinking water bottles a few times a day.After breakfast the group would board the bus at around 10.30 am and leave for sight seeing to return to the hotel for lunch at 1.30 the after sight seeing would be in the same air-conditioned bus- from 2.30 pm to 5.30 pm. Then we would be driven back to the train where we would be welcome by tea and snack/ hot soup depending on the time of arriving. 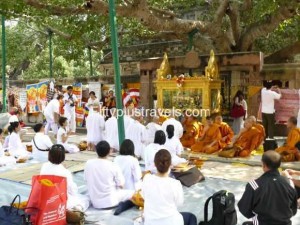 This was followed by dinner in the train. The dinner menu differed each day and we were served two excellent Thai dinners, as the larger part of the guests was from Thailand. My impression is that the Fiftyplus can ask for special dish or meal.The time was so well portioned that the guests got sufficient time to savour each site and even do some meditation if they wanted to. Announcements in the train were very clear and audible – a vast improvement on what we hear on the airports abut most of the times just can not decipher. The entry of the Group by bus into Nepal for visiting Lumbini and returning back to India was fairly fast and definitely hassle free.

I hate to express my negative impression of the guide services when everything else was so very good. The Guide was not up to the mark in his knowledge of various places of visit, besides being a very poor organiser. The Fiftyplus would find this trip to be enjoyable and not causing any noticeable physical or mental stress. Of course one does feel tired at the end of each day of sight seeing but then there is a long period available daily for rest, sleep and recouping of one’s energies. 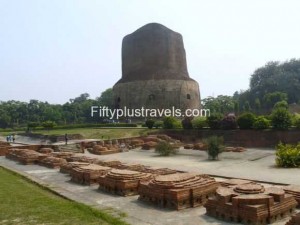 services and categories not only with politeness but also with great respect. I think we are learning our lessons fast.But for the poor guide services, I would rate the trip organisation to be of world class. Bravo IRCTC!

P.S. To put the above assessment in perspective, I may add that I paid full fare for this trip and did NOT get any special concession or rebate from the IRCTC. 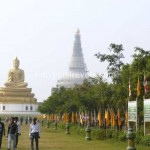