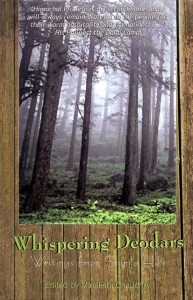 Shimla has long been at the forefront of India’s colonial history, largely credited to its beautiful landscape and cool environs. A small town rich with events, architecture and memories, Shimla still hasn’t lost its enviable charm. Much has been said, written and shared, about this wonderful town which is a halfway city by now, although, increasingly threatened by an overflow of tourists. It is no wonder then that an endless wealth of writings on Shimla is simply waiting to be packed neatly into read-worthy treasure chests.

Minakshi Chaudhry’s anthology Whispering Deodars is one such chest, brimming with, more often than not, literary gems contributed by an eclectic mix of interesting people who may have shared a past with the Shimla hills. Perhaps, as impressionable students, as dedicated professionals, or, as proud residents. This collection spans a wide range of topics through its numerous personal accounts, as well as, through its sometimes pedantic, and oftentimes objective articles.

A former Governor of Himachal Pradesh, V. S. Ramadevi, shares with her readers A View from the Raj Bhawan. It was during her tenure that a Cabinet decision was taken to convert the Tudor influenced Barnes Court into the Raj Bhawan permanently. H Kishie Singh gives the story of his mother, the redoubtable Malvinder Kaur and her defiant trot across the Ridge. Vipin Pubby recollects his stay the Shimla.

In Be Prepared! A Simla Boy Scout, Ruskin Bond narrates, in his delightfully inimitable manner, how he came by his Boy Scout’s cookery badge as a student of Bishop Cotton School, without having cooked anything in his life. Punam Gupta paints numerous Landscapes of the Mind with celebrated artists associated with the town: Amrita Sher-Gil, Ram Kumar, Krishen Khanna, to name a few.

My personal favourite is Dr Pankaj Khullar’s Eulogy to the Green Hills; wherein he mentions this swimmingly chuffed writer in his long list of fauna and flora typical of the region. Not by name, of course, but as a bird-type seen only from March to December: the Red-blazered Chelsean! Alongside the pink-cheeked First Grader, the yellow-shirted Collegian, the brown-coated Aucklandian and the Blue-blazered Cottonian.

While Asif Jalal, in his well-researched essay Shimla: An Educational Profile, describes the leading public schools that dot the landscape of this “`85 land of brooks of water, of fountains and deoths `85” The articles vary from light-hearted ones to meticulously detailed ones of the town’s rich historical past. It takes you down memory lane as the place metamorphoses from a sleepy hill station to the seat of the British Raj, enabling the reader to form a complete picture of Shimla’s past and present.

Whispering Deodars is a well-meaning endeavour by the author, who evidently has a deep love, and knowledge, of Himachal Pradesh.