Thoughts For The Young Minds 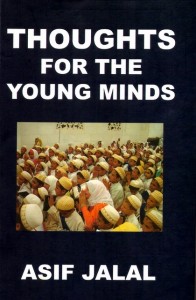 Get over it, and get on with it, urges Asif Jalal, author of some of the most inspirational contemporary writings. An earnest endeavour to address Muslim teenagers plagued with complexes, his book attempts to assist impressionable minds in dropping anchor towards the pursuit of a more meaningful life. As a student, the author himself dealt with many puzzling, often demoralising issues ranging from religion to career options. More recently, while serving out his posting as Superintendent of Police, Lahaul Spiti, he found himself with a lot of time to introspect. He sought to resolve disturbing thoughts: What makes the Muslim youth so angry and hopeless at the same time? Why do they feel marginalised and alienated from the system? When, and why, did they begin to believe that the system is conspiring against them; that other communities are their enemies?

Reasons and answers for all of the above, and more, manifested themselves in a collection of informative essays called Thoughts for the Young Minds. He believes that much of the convictions and perceptions that shape their destiny and guide their actions are distorted. Drawing from his own experiences as a middle-class youth of modest means, he stands apart in his determination to work hard towards achieving his goals, shrugging off the widespread and deeply ingrained self-defeating attitude he feels afflicts Muslim youth in Indian society. Following the completion of his Master’s from Jawaharlal Nehru University (JNU), he worked as a research aid with Professor Paul of the University of Washington, before joining the Indian Police Service.

An insightful exchange with him recently revealed a remarkable objectivity towards his subject: “The popular conception about Islam, its philosophy, the question of destiny and place of rationality in life among Muslims prevent them from succeeding in the existing system. In fact, the kind of values imparted to them in the name of religion is regressive. They receive a narrow and distorted version of Islam. They are told that listening to music is un-Islamic, pursuit of worldly success is a worthless activity, watching television is a sin; modernity is vile. All the time their hearts should be given to God’s prayer and devotion, and not to their professional goals. But they find the world operates in a very different way from what their supposed religious scholars preach. They find themselves caught in a bind”.

He elaborates further, “If they follow modern values, they lose the grace of Allah; and if they follow the so-called religious values, they lose this world. Thus, a profound sense of guilt builds within their psychology and sits deep within. Their life becomes a trip of endless hypocrisy. We believe one thing to be right but practice other thing in our self-interest. We start believing that practicing Islam in the present environment is like walking on a line of fire. Much of their time and energy is drained in a struggle to get rid of the contradiction. And many times people are never able to sort it out throughout their lives”.

The contents of the book are categorised under seven sub-headings: Mind and Faith; Study and Growth; Sex and Life; Society and Culture; Strategy and Techniques; Experience and Encounter; and Personalities. Through these honest, sincere and thoughtful essays, the author seeks not just to inform, but also advise Muslim youth to cleanse their thinking and rid themselves of a minority’s psychology: the feelings of alienation, marginality, weakness, discrimination, insecurity and victim-hood. Such a thinking and belief, writes Asif, is poisonous and detrimental to a successful and peaceful coexistence.