The Many Moods of Hola Mohalla 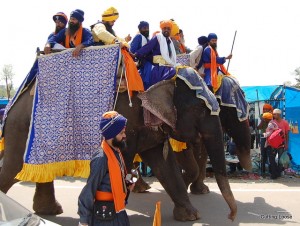 In theory, I was no stranger to the Hola Mohalla celebrations hosted annually at Anandpur Sahib, the place they are said to have originated from in the year 1701. Guru Gobind Singh, the tenth Guru of the Sikhs, while battling several enemy forces simultaneously, decided to assign a day entirely to mock combat amongst his warriors, the Nihang Singhs. Held a day after the festival of Holi, it is a practice that has endured distinctly, and sartorially, for the past three hundred years; its innumerable colours, moods and heroism braving their way to an enviable place in Sikh heritage.

In practice, however, I was to experience the magnitude of this tradition for the first time 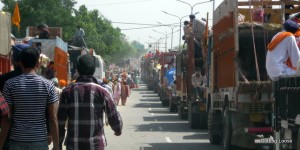 this year. Having returned to Citrus County for another dose of hearty Punjabi hospitality over the Holi weekend, I joined other guests on their outing to Anandpur Sahib. A picturesque country road through gentle brush-swathed hills brought us to Nangal; from there, a narrow track along the canal embankment to our destination. Where we came up behind many kilometres of slow moving, devotee-laden vehicles of varying shapes, sizes and horsepower, as well as, throngs of colourful people on foot. 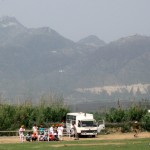 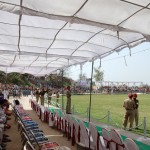 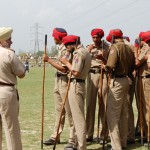 Abandoning an ambitious plan to visit Keshgarh Sahib, we turned instead towards the Charan Ganga Stadium to grab us some seats for the promised exhibition of gatka (martial arts). The stadium, looking out to the Naina Devi peak, was a picture of serenity when we got there. Policemen idled around while bands of well-behaved visitors trooped in gamely; slowly but surely filling out the arena.

We had just seated ourselves under a shaded enclosure, readying

our cameras, when a gent occupying the entire front row by himself insisted we join him. He had apparently mistaken us for media professionals. Not wanting to look (nor shun) a gift horse in the mouth, with nary a twitch, giggle or change in expression, we unabashedly obeyed.

The stadium, brimming with cheering crowds by now, broke into loud applause as participants began arriving. 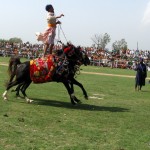 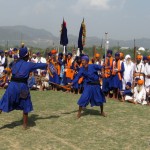 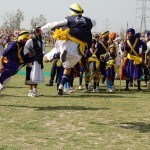 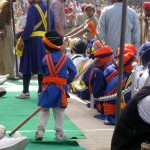 First came a lone motorcyclist, and then beautifully dressed horses and ambling elephants, followed by exponents of gatka in full regalia. Age was evidently no bar as veterans and young rookies both took to the ground, even as a cherubic toddler kitted out in the customary colours, watching keenly from the sidelines. The animated tent-pegging, the mock battling, the war-cries renting the air, the loud cheering, all so incredible, continued late into the afternoon. 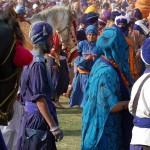 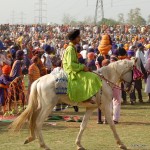 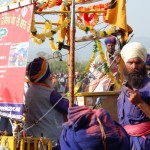 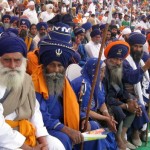 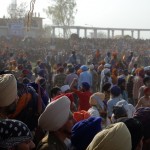 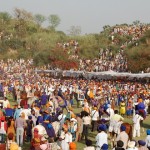 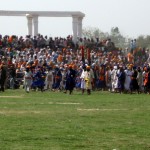 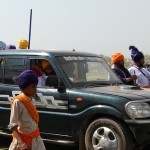 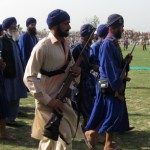 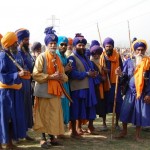 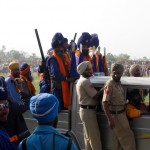 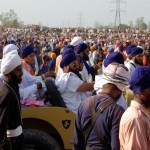 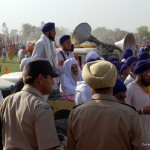 They were accompanied by hordes upon hordes on foot, similarly equipped, colour-drenched, and led by respective dera heads. The very powerful, the not-so, the threatened, the secure, the benign and the not-quite were all making their presence felt. It was akin to being shipped back into time, and landing amidst an ongoing battle between the Guru di Fauj and its adversary. The unfolding scene was simply unimaginable, and quite indescribable. 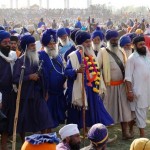 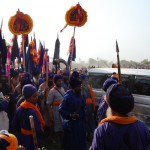 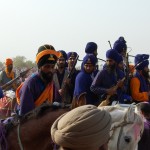 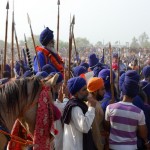 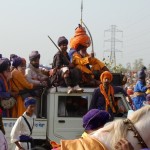 I hope this photographic deluge does richly deserved justice to the splendour of Hola Mohalla.