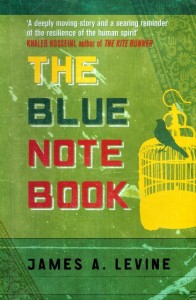 “THIS is the philosophy of the prostitute; I am who I am only at this moment in time; my past does not hang from my shoulders and my future is indefinable and so cannot be a concern. I am nothing else and there is nothing else. As I look at myself in the mirror, it dawns on me that the tree was correct—all is created for me alone. I close my eyes tight and hear the tree laughing.”

The Blue Notebook deals with a life you may prefer not to know about. It is the kind of grim fiction that unveils a truth so painful, you will it differently. The ugly reality of a child prostitute called Batuk. Sold into sexual slavery by a poverty-stricken father at the age of nine, this book is her heart-rending story. Although seriously traumatised, stunned and disoriented, she survives her rough initiation, and is sent to a special “Orphanage”, where she is brutally taught her new trade. It is here that Batuk meets her best friend, Puneet, an eight-year-old boy whose beauty is flawless. Boys are especially prized as prostitutes, and are trained to be girl-boys; even as they are castrated before adolescence to enable them to continue their profession.

Written as a journal at the age of 15, the young protagonist’s reflections are a deeply moving reminder of the hardihood of the human spirit. Even though the subject matter is unsettling, the imaginative and beautiful Batuk is an unforgettable character. Having learnt to read and write during a tuberculosis-stricken period at a missionary hospital, Batuk later finds escape from her terrible existence by documenting her musings. It all began when one day, the proprietor of the brothel, Mamaki Briilla, drops a pencil, and instead of returning it, Batuk steals and hides it so that she can recount her early life. Holed up, thus, in a ‘nest’ on the Common Street, a street in Mumbai where children are caged, awaiting customers, she manages to record her haunting thoughts despite the harrowing circumstances surrounding her.

She imagines that words remain with her even in her darkest moments, saying that inside of herself, she can “hide an army of whispering syllables, rhythms, and sounds. All you may see,” she says, “is a black cavity that fills a tiny girl, but trust me, the words are there, alive and fine.”

James Levine’s debut novel does a fantastic job of getting us into the head of Batuk. Though she has grown up amongst family and has had to face the betrayal of those closest to her, she tries to make the best of it by always seeing beauty in the bleakness around her. She deftly weaves a world of exquisite stories out of every day tragedies, in order to trick herself to retain some semblance of sanity. The narrative is so beautiful and so unbelievably sad at the same time, that readers may find it unputdownable.