Tsering is the loquacious half of the duo that owns and runs the Phuntsok Garden Café on the left bank of the Beas, located at a hard to miss stretch on the road leading to Rohtang. It is their reputation as conjurers of a breakfast par excellence that brings you to a screeching halt here. Her husband, the extremely shy Jamyang, labours away at the kitchen counter to sustain that reputation; it is a labour of love, you tell yourself, as you bite into a fluffy spinach and mushroom omelette alongside a chicken rosti. Tsering’s home-made muesli is an instant hit as a healthy start to a strenuous day, and so are Jamyang’s spongy pancakes with sliced bananas and hot chocolate sauce.

Even as you are working hard at swiping that last bite through the sauce on your plate, 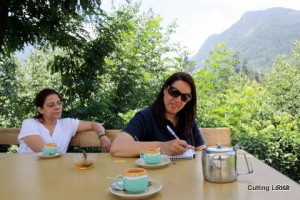 they can somehow tell that you may have been a tad greedy (possibly by the porcine manners displayed while eating), but fret not, an antidote is at hand: a piping hot ginger and lemon tea. Works magically, and brings you back repeatedly for more of the same, or their freshly baked cakes and breads. The momos, too, take on an entirely new flavour when relished outdoors in their tiny backyard, with the lights of Old Manali twinkling at you as you slurp away at your soup. 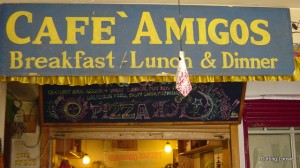 And if anything were to bring you to the Chowk or The Mall (although I can’t come up with a single reason beyond the mutton momos at Mountview and the eggplant preparations at Chopsticks) it would be a good respite to stop by at the Café Amigos for some carrot cake and coffee. Further up on the Club House Road and towards the Log Huts, another Chinese eatery is a favourite with vegetarians. Called the Green Forest Café and approached through a narrow alley, it definitely does not score on ambience but will give you your money’s worth in a large bowl of soup and a takeaway order of vegetable momos. In case you missed the point, Manali is big on Tibetan cuisine.

Actually, it is really big on Punjabi, South Indian and Gujarati cuisine as well, going by the number of unsightly neon signs blinking themselves dizzy on the High Street. And guess what? They evidently do brisk business, again, going by the number of buses with alien number plates disgorging their passengers. But tandoori trout alongside farsaan and dosas, prepared by Nepalese cooks, although a huge draw for tourists, was enough to keep me at bay. My reasons for staying away are endorsed by none other than a certain Mr George Bernard Shaw. To wit, “I dislike being at home when I am abroad”.