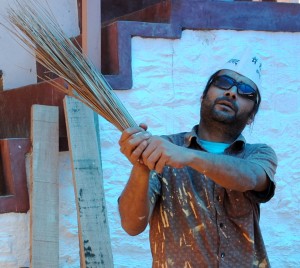 Frank Schlichtmann spent a few years of his childhood in Kangra District with his Bengali Buddhist mother. His memory of those days brought him back to the valley in 2008 from far-away Hamburg, Germany. He has been a traveller, a film maker, a writer, a cook and many things, but now he is primarily a father of a 6-year old. He runs the 4tables project in Gunehar, of which ShopArt/ArtShop, the 4tables restaurant and the 4rooms hotel are puzzles. 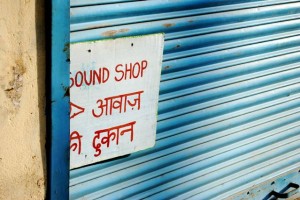 was walking up the main road of our village, past the many empty shops that lined the road. What is relevance? Why for instance are these shops here if there is no prospective of them being used productively? And what would be something ‘usefull’ to fill these shops with? My answer was: arts. We are talking contemporary, modern arts here: arts in the 21st century. ShopArt is not village or villager’s art, just because it takes place in a village. But being in a village and outside of the usual, urban art spaces, it offers an unique opportunity for artists to relate to themes of contemporary India and the world. 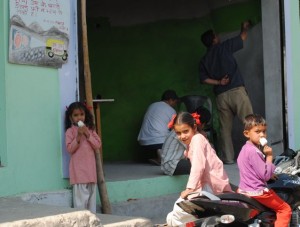 In the first installment, and this will remain the task for artists of future installments as well, it was important to insist that artists incorporate the village and the villagers into their work. My method to achieve this was simple: each artist got a shop for 3 weeks and was told to open it every day, 9-to-5, and work in there in front of the prying eyes of the villagers and visitors. The work created in these spaces would then, on the final week, be exhibited in the same space they were created. In this way, not only the final artistic product, but the process of creating arts itself became the theme of the exhibition.

We had a group of excellent artists who were up to the task. They did not feel intimidated and above all, they did not budge from their usual, contemporary understanding of arts. So, we

finally had extremely interesting ArtShops: a free-land movie theater of self made films, a sound installation, a flower shop, a tea shop, a mud and wood bed in a burned down house (which would later remain as a real bed in a real hotel)… and so on. We had thousands of people– villagers as well as expats, tourists, urban art-lovers– flocking to a remote village just because of arts!

Now, after the first ShopArt/ArtShop, I have started seeing this as an INDIAN event, a possibility to reflect upon and bridge the great divide that exists between urban and rural India. For this reason, my work as curator in future will be to attracting modern, emerging artists to the village and putting them in ShopArt/ArtShop situations to encourage and enable Arts that comes out of this dynamic juxtaposition. The result will, I have no doubt, be relevant not only in the world of arts.