Science to the Rescue

This is a story I wrote on invite for the Chicken Soup for the Soul series. It was included in an edition titled Indian College Students edited by Arti Jain & Rajat Poddar. The incident narrated is true; for the non-believers amongst us, I have included photographic evidence.

It’s 5am on a fine autumn day. Most inmates of Hostel Number 3 at the Government College for Girls in Chandigarh are dead to the world. Save four furtive figures peering through their balconies at the main entrance. Soon, the night watchman will unlock the door and yawn his way out of the premises. It will be sometime before he is replaced by another. It is that window of time and quiet that these girls are awaiting.

“Come on”, Kusum hailed out to Seema and me in a loud whisper. “Simmu will meet us at the landing”. I backed out of my room with my jogging shoes in one hand and a jersey in the other. Seema waited outside with the doggy bag laden with goodies nestling in her arms. “Here, grab this”, said a hushed voice from the dark as Simmu emerged balancing a load of items. I just about managed to salvage a basket and a rug before they clattered to the ground. Many giggles and shushes later, we wiggled through a narrow gap in the door. Any wider and its squeaky hinges would wake the dead. I quickly hopped into my shoes before sensing our way through the dawn shadows. Our destination was the lushest corner of the boundary wall, dense foliage shading from view a permanently placed chair to help leverage us across. Crouched low, we scurried across to the chair, heaved ourselves up, straddling the wall for a quick glance to ensure we hadn’t been spotted, before jumping down to a few hours of freedom.

We marched through Sector 11, using shortcuts to emerge at the roundabout of Sectors 2, 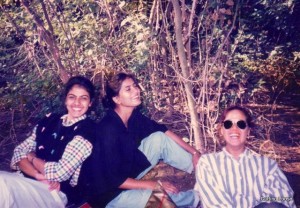 3, 10 and 11. Following the road to the Chandigarh Club, we turned right onto Sarovar Path making our way towards the Lake. Dodging to stay out of sight of those on their morning constitutionals wasn’t going to be easy and we still had over two kilometres to cover. “Let’s get a rickshaw”, pleaded Seema, “if my folks were to find out, I’d be a goner!” She wasn’t overstating her case. Luckily we spotted two rickshaws with their canopies stretched out. 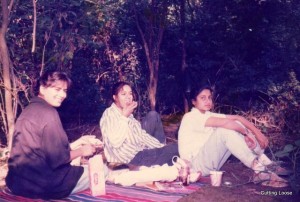 Noticing that the occasional walker had swelled to a throng, we changed direction, towards the Gurudwara located about half a kilometre off the main road. Relieved to find the place devoid of any human presence, we found an airy clearing a little further on amongst the thick foliage. Our rather eclectic picnic consisted of boiled eggs, bread, jam, biscuits and stone-cold samosas, sneaked from the college canteen the previous evening. Tea came out of a flask and the milk addicts had carried straws to stick into their packets of pasteurised milk.

Hunger pangs satiated, Kusum the shutterbug and Seema took off to search for photo 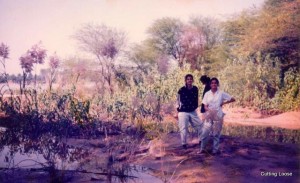 opportunities. Simmu found a perch with her very own sunbeam to read aloud from her favourite poet as I put away the trash. Soon after we went looking for the other two and found them engrossed in taking shots of the landscape. A clump of bulrushes across a crusty patch appeared to be their subject. “Take one of me”, I interrupted cheekily as I posed for the camera, successfully obstructing their view of the tall grass. “Me too!” Simmu ran across to join me. Ever the actor, she pretended to serenade the bulrushes. It was time to be goofy. 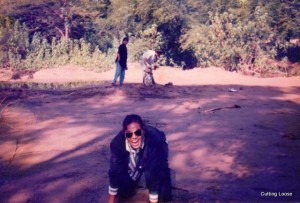 Kusum gave up any attempt at serious photography, handing me the camera with a mock threatening, “you asked for it, girl!” Then began the theatrics; the three of them aped their favourite Bollywood heroines, exaggerating actions and expressions as I clicked away. Suddenly, I felt the earth give way under me. Not thinking much about it I moved to a firmer spot towards the girls to take close ups. That was a mistake. The crust cracked immediately swallowing my feet up to my ankles. Surprise gave way to horror as a petrified Seema squealed, “Quicksand! Oh my god, that’s quicksand! What are we going to do now?! ”

“Take the camera, Seema, I’ll run out”. Mistake number two. As soon as I put my foot 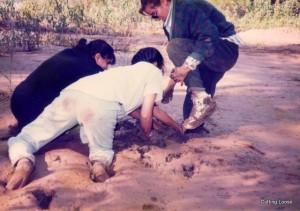 forward to take a leap, my weight sank my leg up to my knee. Now, I was in deep. Literally. All moves, in any direction would simply suck me in deeper. Simmu and Kusum ran around looking for some thing or someone to help pull me. “Come on, do something…! I don’t want to die”, I wailed in fright. “Shut up!” Simmu’s equally desperate tone reached me, “you’re not going to die!” I could feel the morass close around my thighs.

Simmu continued to mutter to herself while knotting our jerseys and jackets together. I thought she was praying till strange words floated to me despite my fright numbed condition. “Simmu”, I screamed, “can you focus?” “I am I am! I just can’t remember it!” “Remember what?” Kusum’s usually soft tones took on a high pitch. But then Simmu threw down her wanna-be rope, ran to our clearing and returned with our thick cotton rug. She threw it on the marshy surface between us, gingerly seating herself on it as close to me as possible. Kusum had positioned herself behind her, ready to lend a helping hand, from the safety of the shore. 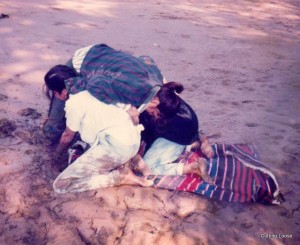 “Okay now, heave yourself over me”, Simmu instructed with her hands pulling on my waist. First attempt, nothing; second time, minor success. Another heave and I was out sufficiently for Kusum to grab my arms over Simmu’s shoulder. Now began the final pulling and pushing. Kusum pulling hard on my arms and Simmu pushing me towards her. I was finally dragged out, and over Simmu’s cross-legged figure to terra firma. She scrambled ashore, too, leaving a rather deep dent in the midst of the rug. Shaking with unimaginable relief at having survived a near brush with death, and many mucky hugs later, we found a jhuggi with a water pump to wash up as well as we could sans a fresh set of clothing.

“By the way, what was it that you were trying so hard to remember back there?” Kusum turned to Simmu, as we collected our wits and made to leave. “An equation”, grinned Simmu. “What?!” “You know, the one which states pressure is equal to force per unit area. That’s how I hit upon the idea of the rug. It helped us keep afloat, remember?”  Chuckling delightedly, I hugged her real hard then, realising that I was alive only because of her scientific disaster management skills!

It’s close to a quarter of a century since that incident. But Simmu still holds a very special place in my life. I have given her plenty more reasons to throw me a rope – or spread the rug, if you will – over these past twenty-five years. And I carry on goofing, secure in the knowledge that she is just a phone call away. People believe we are dear friends but truth be told, I wear her in my life as you would a lucky charm. Close to the heart.

NOTE: You may place an order for your copy here.