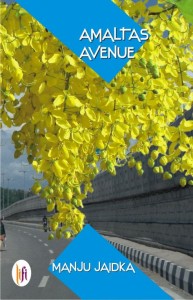 Amaltas Avenue, Manju Jaidka’s third novel, is set against a backdrop of campus happenings over a period of three days during a sultry Chandigarh summer. The book focuses on a number of characters who share a common milieu, including the eponymous residential neighbourhood, even as they drift through seemingly ordinary lives, playing out mundane everyday roles at an individual level. It is not to be confused with other breezy campus writings as Amaltas Avenue in fact brings to attention more complex issues through its protagonists–often antagonists–when they are confronted by unexpected turmoil in their personal and professional arenas.

An insider for over forty years, the author has had a ringside view of the intrigue, manipulation, fraud and power games that go on within the realm of academia. In contrast, student ragging and indiscipline takes on the reminiscence of a Sunday picnic, while education moves to the backburner in her narrative. Such is the story-teller’s craft that the reader is often found searching for the proverbial fine line between fact and fiction. Borrowing heavily from her own role as student, teacher, warden even, at the Punjab University in Chandigarh, Jaidka is able to flesh out the locales, life-altering events, and her mixed-bag of characters in the liveliest fashion.

Amaltas Avenue is divided into three sections. With the story beginning on a Scorching Sunday, merging languorously into a Muggy Monday before diving headlong into a Torrid Tuesday. Over this timeline the book traces an array of emotions through its characters–joy, love, passion to despair, loneliness, sorrow–followed by a resigned acceptance of reality as it were. Some episodes are indulgently inspired by a subject close to the author’s heart – English Literature. The manner in which a desperate Lachhman Das clumsily attempts to woo his lady through a love potion provided by Mr Chotiwala, the hip tantric, and quite comically ends up being chased by both mother and daughter is likely to evoke the Bard’s A Midsummer Night’s Dream.

Greek mythology makes an appearance too. The quietly despairing Narendra takes his life cues from a painting by Dutch artist Peter Breughel, a depiction of the ‘Fall of Icarus’. He, too, eventually cock’s a snook at fate with the finality of his choices to end a life coming devoid of illusions. Other contemporary protagonists are found in Charu, the teacher who finds cheerful fulfilment on online dating sites; in Atul Agnihotri who is infatuated with a colleague, his neighbour on Amaltas Avenue, and is willing to go to many lengths to get her attention; and in young professionals Sumi and Nagina, the former venting his frustration at his professional compromises on a blog delightfully called bantusapera.com. References to the ubiquitous Facebook are aplenty, as are the carnal energies of ambitious student leaders.

With its engrossing language, refreshing content, well-etched characters and humour-laced narration Amaltas Avenue lends itself to an easy-paced read. Yet, despite a generally appealing storyline, this book will in all likelihood resonate louder with an audience that is either in the know or is associated with the world of academics – whether student, instructor, or administrator. Louder still for readers from the region for whom the laburnum tree with its brilliant yellow flowers dotting Chandigarh at large could well be a nostalgic invocation of sweltering days spent under its sunny boughs. That even scorching summers have a golden lining is clearly the sub-text readers take-away once the last page is turned.