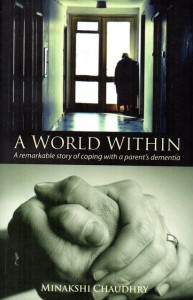 Book churner Minakshi Chaudhry’s latest literary outing, her 13th, is a clear departure from her earlier works. A World Within is a two-year conversation between a dementia-struck father and his daughter even as he slowly and surely disconnects from his familiar former self. It is the heart-wrenching story of a helpless parent building bridges to nowhere on a despairing child’s watch.  Told with her trademark humour, this time encasing her pain, this prolific teller of ghost stories, lovers’ litanies, and valleys afar, brings you an extraordinary tale about dealing with her father’s losing battle with the debilitating Alzheimer’s disease.

Though fictionalised, the book has been penned from an up-close and extremely personal perspective given the author’s own close-quarter view of a malaise that is socially scoffed off as memory loss. On the contrary, A World Within reveals, it is a brain disorder which arrests patients’ ability to reason, think or communicate. At one stage, they may even forget to swallow; worse, breathe. India has nearly forty lakh dementia-hit currently, with the number expected to rise exponentially in coming years as the elderly count spirals up to a whopping twenty crores. The book is in part a moving tale, in part an endeavour to bring attention to an affliction under-researched; it is treated with anti-depressants, vitamins and sleeping pills.

How really harrowing an experience it can be for the patient’s family is revealed to the reader through the author’s brutally honest introspection about the daughter’s reactions to her father. From the initial amusement to frustrated impatience, from ignoring, later avoiding and altogether escaping his repetitive queries to resigned acceptance. “At one stage you have to accept things as they are. And you have to do what you can do to make his life more dignified,” Chaudhry shares in a communication. Adding, “It is a big social issue that needs to be taken care of. There is an urgent need to educate people on how to care for suffering family members and, in some cases, even reverse the symptoms. In the book I have dealt with all facets of the disorder and hope it can be used as a guide on how to properly look after a loved one who has dementia.”

Note: This has earlier appeared in The Tribune.