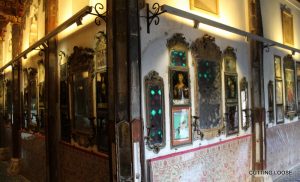 For a man of his artistic genius and versatility to nearly fade from the narrative within three centuries of his existence is a tad baffling. But for one-line references and the odd paragraph in numerable writings, travel guides, and coffee table books themed around Kutch arts and crafts, little is known of Ram Singh Malam, an incredibly multi-faceted craftsman, today. Were it not for the Aina Mahal (Palace of Mirrors), his greatly diminished but still abiding pièce de résistance, Malam could well have been an easily missed footnote in the history of the arts.

If anything has endured, it is the prolific accounts of how he arrived on 18th century European shores to 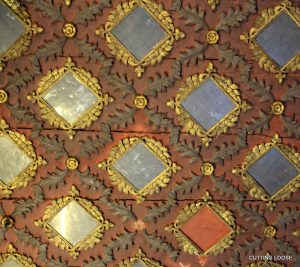 edify himself with the many crafts he undeniably eventually mastered. Hailing from a seafaring family of Saurashtra, Ram Singh is said to have run aground while yawing his way to Africa as a young boy. Rescued by a passing Indiaman, in all likelihood hoisted with VOC colours, he sailed to the Netherlands. His arrival coincided well with a blossoming enthusiasm in the country for decorative arts. Charmed by all the exotica, the lad with a natural talent for using his hands probably stayed on to acquire expertise in glass blowing, enamel work and tile making. 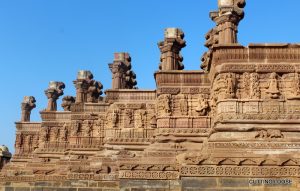 Another version has him sailing to Dutch shores at the behest of Maharao Lakhpatji, a poet, musician, and art aficionado credited with recognising Ram Singh’s creative brilliance. After taking the youngster under his patronage, he sent him off to Europe. Where, in the ensuing decade and half that he reportedly spent there, alongside the afore-mentioned crafts, he also learned to design buildings, make clocks, carve stones, and cast cannons. Most of this information harks back frustratingly to just one source, Black Hills by LF Rushbrook Williams. 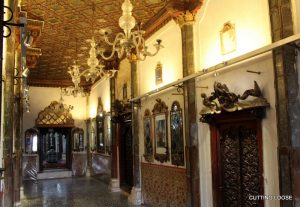 Jethi, former curator of the palace museum, conducts his guiding business post-retirement. A passionate historian of sorts, having authored numerous articles on Ram Singh Malam, he agreed to meet with me to share his own attempts at tracing the virtuoso. His efforts sadly came to naught despite a helpful consul general, who had in turn detailed a couple of historians to comb through archives in Holland. Yet, not even a malam ni pothi—a considerably creative and artistically illustrated navigational aid that no self-respecting seafarer would be caught without—to his name! 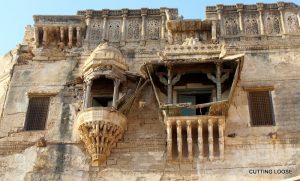 It appears to me equally possible that the enterprising sea merchant got there on his own steam, equipped himself with these skills, returned to set up a glass-making factory, tales of which resonated far, and that he was commissioned to design and decorate the Maharao’s ‘Palace of Mirrors’ in Bhuj. It was a task he went about with astonishing aesthetic alacrity, as I evidenced in the temblor-hit yet proudly upright Aina Mahal on a visit earlier this year. 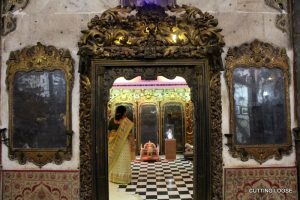 the region—little prepares you for the sumptuousness, even if of somewhat shabby upkeep and display, within. Ram Singh Malam noticeably employed his creative versatility to swathe every available inch of the royal residence’s marble-clad walls, columns, ceilings, doors and windows with all manner of mirror-work at his call. These range from life-size ones, framed in gilded rococo that line Hira Mahal, the royal bedchamber, to the tiny circlets and squares embedded in the beautiful carved wooden ceiling.

Corridors around the bedroom are embellished with an eclectic mix of royal portraiture, Indian and otherwise, interposed with other paintings and if possible additional mirror-framed mirrors. Indeed, profuse European artwork headed for the Mughal court as gifts from the VOC vying for the Emperor’s largesse found many a discerning buyer at its ports of call en route. Another section houses reverse glass paintings, a difficult European art vastly practised in China, with which Kutch had a flourishing trade relationship. Depicting Indian deities and expectedly the ruler’s likenesses, these are said to be gifts from admiring and grateful tradesman. 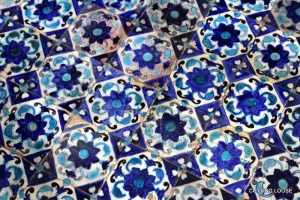 Netherlands those days—chandelier and candelabra collection strung across the ceiling appears to have been brought back by Ram Singh Malam on subsequent visits. The rest, though styled along European lines, was probably crafted at his factory in Mandvi. Another unmistakeable Dutch influence is found on the floor of the palace. It is laid out with tiny blue-and-white tiles reminiscent of delftware that had gained immense popularity and demand in the 17th and 18th centuries. 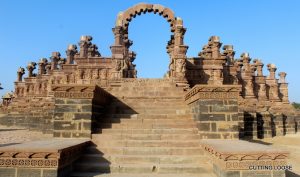 elaborate marrying of local and foreign features, uninterrupted patronage would have irrefutably stemmed from the Maharao’s own appreciation of western technologies and their artistic applications. He graciously supported the talent-endowed youngster on foreign shores when none was reportedly willing to give him time of day in his own backyard.

It seems to me this was a duo most singular; 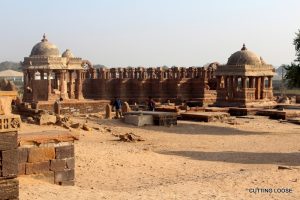 one that succumbed not so much to political ingratiating but to an insatiable curiosity of other cultures. The Maharao’s once-grand chhatri in Bhuj–a poem in stone, if I may–is perhaps the master craftsman’s final and most grateful flourish for a generous patron. Still, it is Aina Mahal that has stayed its ground as an ode to this winsome-twosome.