Recipes of All Nations by Countess Morphy 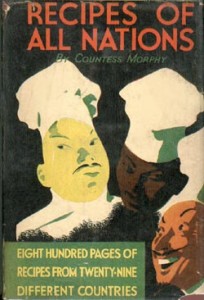 Last weekend, I finally undertook a long overdue, ennui-ridden, housekeeping exercise. My half-hearted attempt at dusting and re-arranging lofty sections of storage nearly had me knocked out cold by a hardbound, 800-page tome. (No, not Sacred Games). In fact, this particular one, by the looks of it, had been around a long, long time. Its pages, yellowed and brittle, gave out that certain musty smell which only the passage of time accords to paper, with a little help from muslin-wrapped mothballs. The book was titled ‘Recipes of All Nations’ compiled and edited by a Countess Morphy.

Chore happily forgotten, I was soon immersed in discovering the origins of this impressive collection. It had no printed details that could give away its age, except for an ink-stamp of ‘The Modern Book Depot, Sialkot Cantt’ and ‘Rs 4.80’ scribbled in a corner. Armed with these titbits, it was easy to assume that it had been a pre-Partition purchase, made nearly seven decades ago. What’s more incredulous, however, is how the good Countess managed to put together such a repertoire without the help of modern-day communication tools.

Countess Morphy was the pseudonym of one Marcelle Azra Forbes, who was born in New Orleans to Irish parents, at the turn of the last century, and later moved to England. Not much is known beyond that, save what is revealed via her prolific writing on cookery through the 30s and the 40s. By her own admission in the Author’s Note, this seminal book on quick-fix recipes, encompassing the popular dishes of roughly 30 countries, was written for the benefit of the ‘modern-day’ housewife: it revealed to her how women in foreign lands solved the eternal riddle about daily food.

Most of the recipes certainly appear easy enough to follow, though not all have precise information on technical details, such as, quantity, temperature and timing. Some exceptions include cooking rice the Indian way. I quote, “Put 1 cupful of Patna rice in a large saucepan of boiling salted water, and from the minute the water is again on the full boil allow exactly 13 minutes”.

While I’m simply an enthusiast of things edible, and no expert, the book appears to be a comprehensive collection of authentic foreign recipes. Certainly, the section on Creole cookery would be the one to experiment with at the onset, given the author’s initial years in Louisiana. This cuisine is a rich blend of the best traditions of France, predominantly, and Spain, interpreted by cooks of aristocratic immigrants, to give it its exotic touch. How else would you describe gumbo fevi, a soup prepared from chicken and okra (!), if not exotic? However, it is the Creole Jambalayas, akin to the Spanish Paella and our delectable biryanis that have pinned New Orleans firmly to the gourmet map. Jambalaya aux chaurices (with sausages) continues to maintain its traditional role as the most preferred one.