“JUST as he put one foot on to the balcony, something invisible seized his body and flung him back into the room. Then he felt a strange sensation as if something was drawing out his strength…” 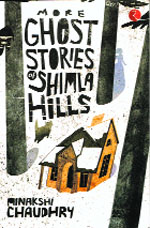 Incidents such as these are generously sprinkled throughout Minakshi Chaudhry’s latest offering, More Ghost Stories of Shimla Hills. A collection of 16 stories about the supernatural, which have their origins in local folklore, as well as, from Shimla’s days as the summer capital of the British. It appears that the supposedly haunted foothills of the Himalayas present an ideal backdrop for sinister happenings; as also the endless source that whets the author’s insatiable appetite for the spirit world. A believer of ghosts herself, as stated at the onset in the preface, Chaudhry has dedicated this book to the ghosts, spirits and chudails of the Shimla Hills!

The fictionalised narrative, based on facts and experiences shared by real people, also showcases the cultural and religious life of hill folk; with many a generation growing up on a steady diet of phantoms, ghosts and apparitions. The spirits in question are mostly of the endearing and benevolent variety; harmlessly going about their ghostly business. Like the horse riding one; it makes its innocuous rounds on the road from Sanjauli to the local medical college, come midnight. Nobody has ever seen the rider, or the horse, yet people vouch for the clear sound of hooves. Similarly, there is the athletic one, a phantom cyclist who has taken a shine to skating at night; while a prankster likes to knock at car windows near the Charabra helipad. They, too, have only been heard.

In Sister Shanti and the English Nurse, the latter is said to be the saviour of the newborn. Wearing a belted frock, long white socks with black shoes and a starched cap, she glides around the children’s ward; saving the lives of babies in imminent danger by merely raising a right royal scare. In Viceregal Lodge, the author shares how utter chaos reigned at the time of building British India’s most flamboyant edifice. Newly built retaining walls and structures would disintegrate overnight; till prayers were offered to appease the spirit of the sadhu who once lived on Observatory Hill.

The most touching of them all, however, is the true loyalist in The Muslim Ghost. Following Partition in 1947, this endearing fellow is said to have accompanied a family back to its ancestral village near the Old Hindustan Tibet Road, in order to safeguard the treasure his owner had been gifted. He longed to go back to Lahore but could not as he was devoted to the family. His unhappiness manifested in playing pranks on villagers, chasing wedding processions and scaring children. It seems at one time the Hindu ghosts objected to his very presence but gave in when he promised to behave. The book also includes a few stories about the violence wrought by those who stayed back long after they died; about the horror of their victims; and about the fear of the unknown. You may believe in the secrets of the spirit world or not, get ready to be spooked!

Note: This review can also be read here.