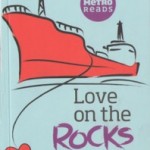 Love On The Rocks by Ismita Tandon Dhanker (part of Penguin’s Metro Reads series), is a romantic thriller that tests the bonds of love and marriage against a backdrop of suspense and intrigue. Staged on the high seas, this whodunit refreshingly explores previously uncharted settings in Indian fiction by placing its characters on a ship. With twenty-four men and one woman cloistered in the vessel, things are bound to happen. That they would be easily and swiftly resolved is indicated by the lively cover on this slim volume. Add to that a believable happily-ever-after ending.

Newly-wed Sancha is excited about sailing with her husband, an officer in the merchant navy, on board the Sea Hyena. But Chief Officer Aaron Andrews is keeping a secret from his wife—a month before she arrived, the chief cook was found dead in the meat locker, his death ruled an accident. First Engineer Harsh Castillo is enamoured of his best friend Aaron’s bride, but that’s the least of his problems. The demons he’s battling have a stronger pull on him. When money is stolen from the captain’s safe, the inquisitive Sancha makes a game of finding the thief. What she finds, instead, is a homicide. With the evidence implicating her husband, Sancha is at a crossroads— should she tell Raghav Shridhar, the investigating officer, about the money or should she give her secretive husband the benefit of the doubt?

The plot consistently twists and turns along an emotional plane without once exploiting dramatic license; allowing instead for a quick and fast-paced narration. The language is good and the writer’s style is generously tinged with humourous inflections. The narrative is carried forward by finely etched characters, all of who assist in developing the story in great measure through their perspective. The author has even managed to wonderfully thread them together without losing the pace of the book. Amongst others, the reader makes the acquaintance of an expletive-spewing Captain, nicknamed Popeye; a meek, perpetually-hungry sailor Baldy and the mysterious Manna of the dark childhood, whose identify remains well-hidden till the end of the book. It is to the credit of Dhanker that Love On The Rocks retains the mystery and thrill that are supposed to be the crux of the novel.

A few factors keep the book from being an overwhelming first attempt. I am of the opinion that the author could have ferreted further into the thoughts of all her characters, giving each of them a distinct style of expression, both in thought, as well as, in deed. Since the story is narrated in different voices, it would have served to break the monotony that usually comes cloaked in homogeneity. An initial mounting interest in this story-telling technique gradually diminishes as layered characterization is somewhat lacking.

Also, while it is made abundantly evident that the author is well-versed with goings-on in a life as a ‘shippie’, the reader can be expected to trip over naval jargon without the benefit of reaching out to an explanation or glossary for assistance. Additional descriptions would have been very welcome and not left a whole lot to the reader’s imagination. At the same time, the book could have done with a whole lot less dialogue. Every character mouths many a clichés and witty repartee, an unlikely happening, given the setting and circumstance.

Love On The Rocks will make a wonderful travel companion; something to curl up with over a lazy weekend even. It is a short and enjoyable read with no pretense at discovering a profounder meaning to life. I would recommend this honestly written book to anyone looking for an entertaining way to spend some time away from terra firma.

Note: Can also be read here.