The erstwhile Katoch rulers of Kangra will have you know that this fabulous fort, spread eagled over a 4km radius, predates Christ. Other than providing a chronological perspective, that’s really not saying much. Given that the Mahabharata, in which Kangra finds a mention as the kingdom of Trigarta,  predates Christ by over three thousand years! 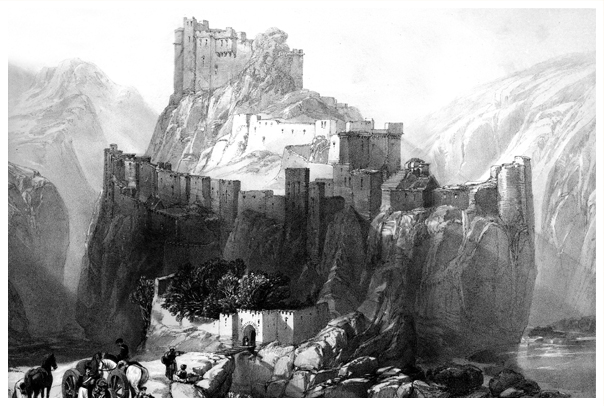 Suffice it to say that this majestic edifice is very, very old. It has passed variously from the Katoch dynasty –  founded by one Susharma Chandra who, it is said, fought alongside the Kauravas – to Mahmud Ghazni of the plundering and looting fame; then onto Firoz Tughlaq, before Mughal Emperor Akbar set his sights on it. His son, Jehangir, was quite taken with the place, too, but then Kashmir happened to him. The Jehangir Gate, and what could have been the site of his mosque, the only vestiges of his imperial presence.

Kangra, also referred to as Nagarkot & Bhimkot, continued thus till the setting of the Mughal sun, returning back to the Katoch fold only some two hundred years later. Twenty years of peace & prosperity under the able administration of Sansar Chandra were then rudely interrupted by Maharaja Ranjit Singh; he took complete possession of the strategically situated fort in 1828.  The main portal (foreground, pic above) still bears his name.

Finally, the British stepped in, following the First Sikh War in 1846. Them, it would take the disastrous earthquake of 1905 to dislodge from the majesty of this incredible poem-in-stone.

A formidable witness to history, it remains a study in steadfastness: silent, sombre, strong. From here on, let us walk the talk. 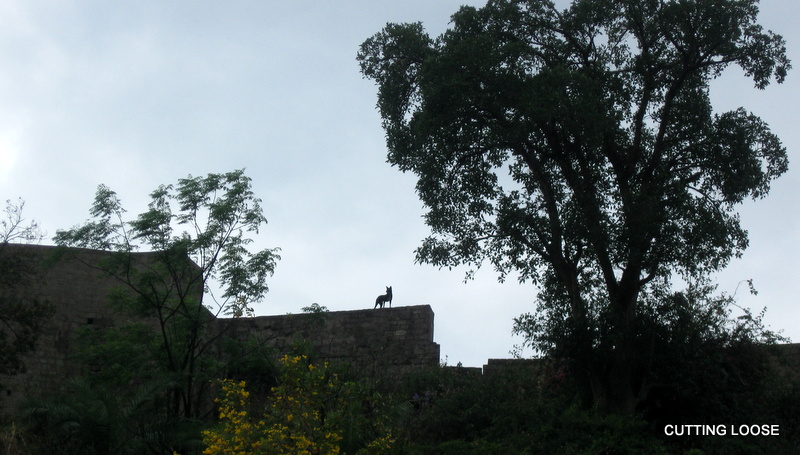 Okay, that’s a dog. But it could have been a wolf. Made an interesting silhouette from where I was looking up.

One of seven portals that usher you deeper into the fort’s many-layered past. The colourful standard visible beyond the doorway bears the insignia of the royal family. 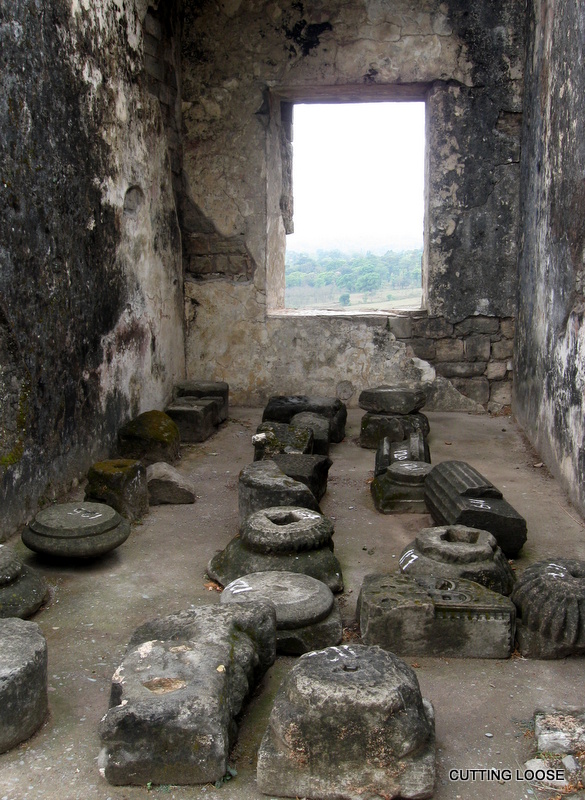 Signs of devastation inflicted by the earthquake lie everywhere. 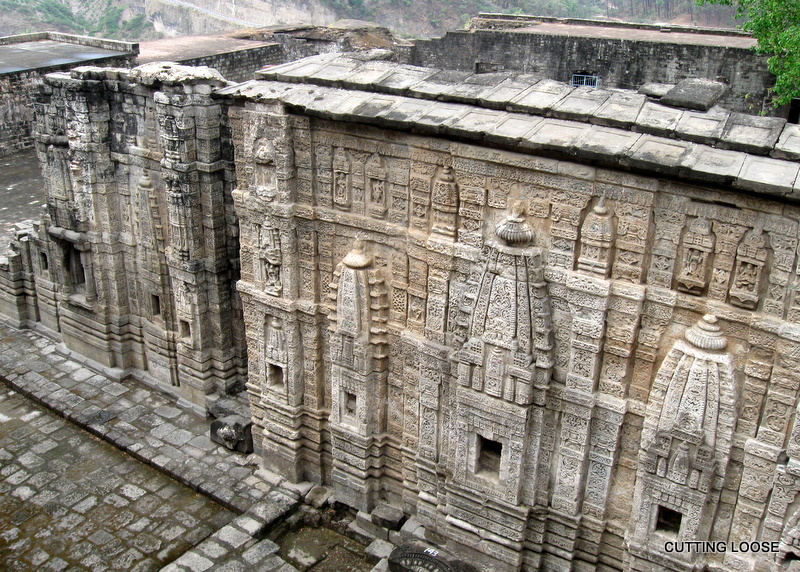 This, an outer wall, is all that remains of the once resplendent Laxmi Narayan Temple within the confines of the fort. 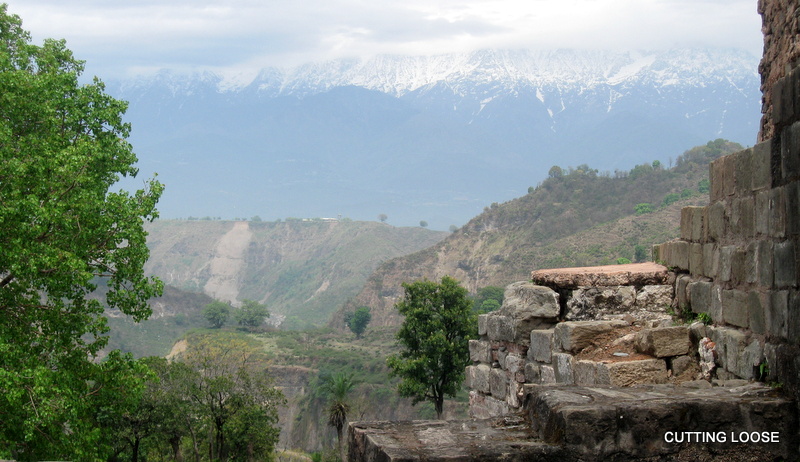 The magnificent Dhauladhars as they appear from the highest but one rampart. Imagine the sight on a clear, rain-washed day! 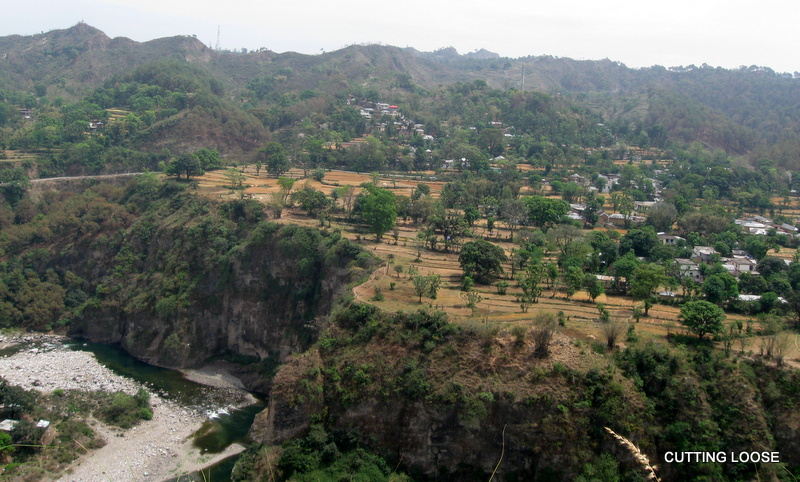 Seated atop a massive rocky outcrop, the fort is naturally fortified by sheer walls dropping hundreds of feet into the Banganga and Manjhi Rivers that flank its sides. Were you to peer hard at the image above, you’ll notice the Kangra Valley heritage train chugging past the golden fields. The narrow gauge tracks, laid by the British in 1932, span Pathankot in Punjab, and Jogindernagar in Himachal Pradesh. 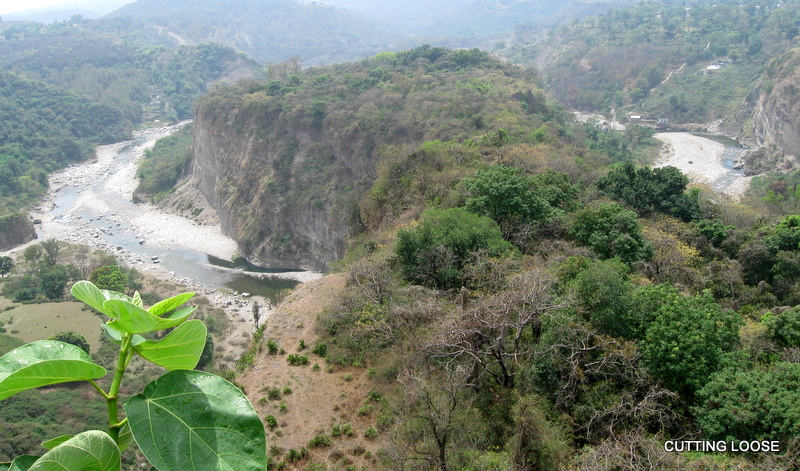 It was topography such as this that attempted – and often succeeded – to keep marauders at bay. You will be greeted by this view from the top-most level of the fort; looking back. 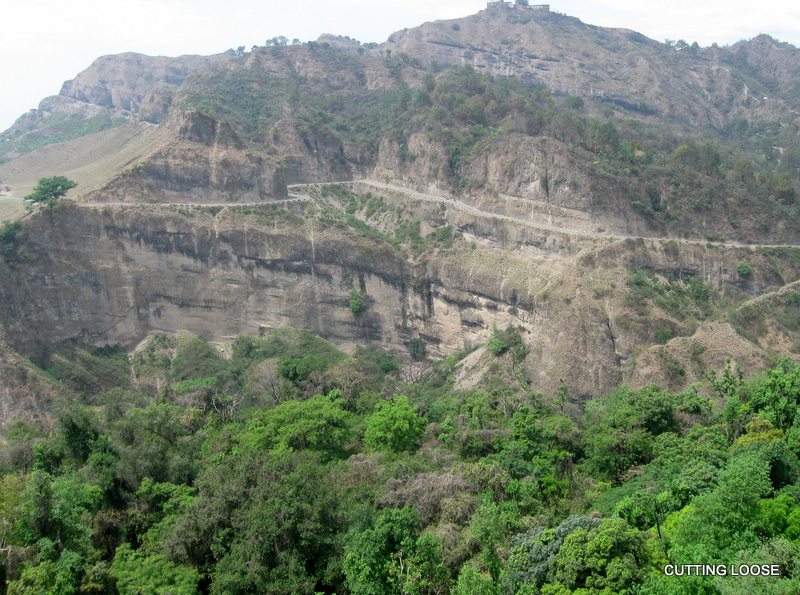 Wide rivers lend themselves as handy moats while them cliff-faces speak volumes. 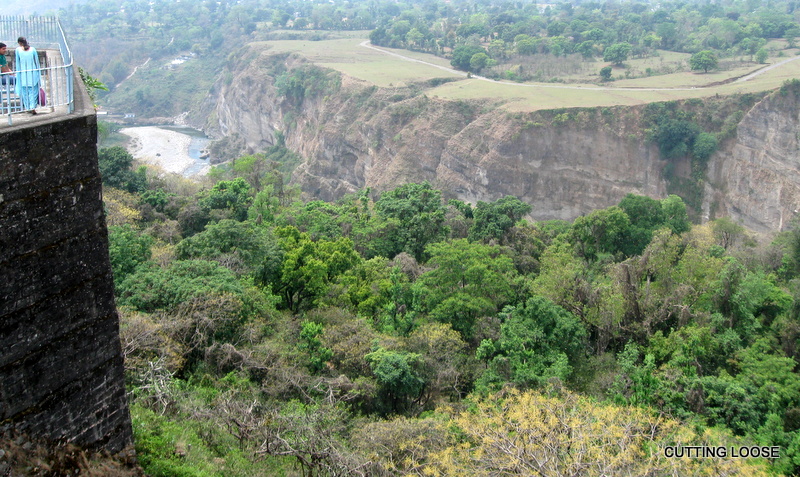 Nothing can keep lovers away, though. There is a compellingly romantic air about this place, you’ll see. 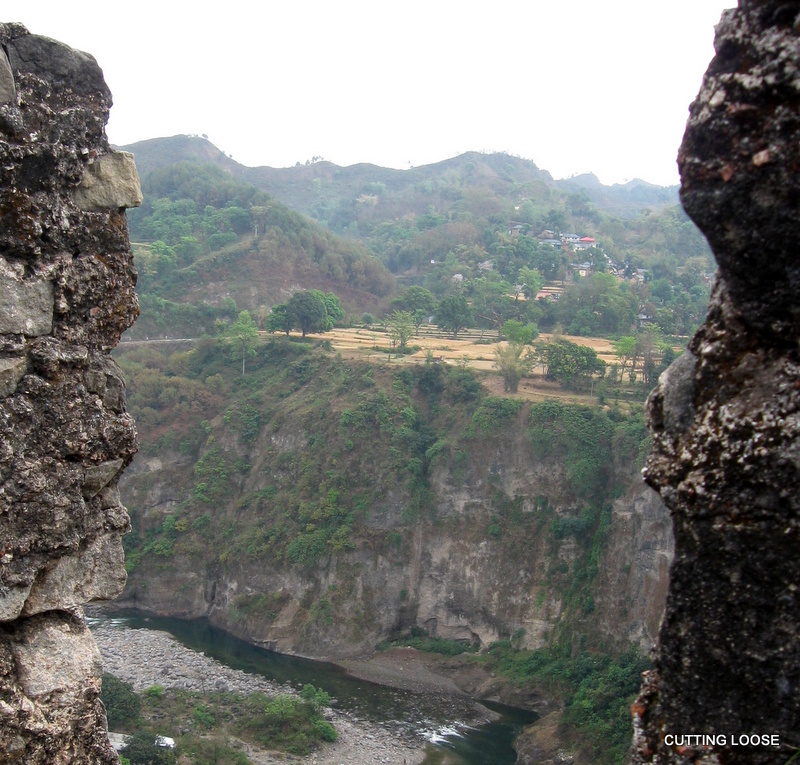 The fort complex can be visited from sunrise to sunset; closed on Mondays. The museum on the premises remains closed on Fridays. A short drive up from the fort is the privately-held Maharaja Sansar Chandra Museum, owned and managed by the Katoch family.