Jaal – Book I of The Kaal Trilogy

Sangeeta Bahadur’s debut novel heralds happy tidings for devotees of speculative literature. For a genre yet to leave an indelible footprint on the Indian literary landscape, Jaal – Book I of the Kaal Trilogy is your proverbial leap towards that objective. 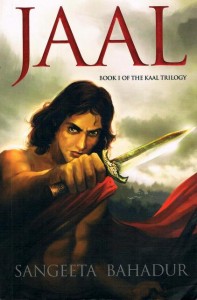 It is the story of Arihant, a warrior with divine powers; envisaged as both saviour and destroyer by universal powers that be. Set in an illusory world in an India immediately after the Vedic ages, the super hero is assigned the task of annihilating Aushij, Lord of Maya, one of the four children of Adi Purush and Adi Shakti. Who, despite being endlessly trapped in dreams following sibling subterfuge, continues to create havoc in the real world.

Readers will follow Arihant’s epic journey from innocence to experience, as he harnesses his faculties to perceive enemies both terrestrial and illusive. Dealing with gods and serpents, politics and obstacles, he comes to terms with his own purpose and potential; confronting massive dangers with the help of a mere dagger and staff. Simultaneously and relentlessly seeking answers to self and identity. Jaal is not your usual mythological interpretation. It has been engineered by an incredibly abundant imagination that borrows from laws of matter, the Hindu story of creation, Vedic philosophy and metaphysics. Coupled with a fantastic command of language, visual descriptions, and a narration that sprints (if you can get over the somewhat slow start), Bahadur gives boredom nary a second chance to sneak up on you.

In an attempt at demystifying her protagonist, the author shares on her blog, “Arihant has the universal appeal of the super hero who, even as he grows to fit the prophecy of his incredible destiny, never outgrows the emotional vulnerability of his humanity, his sense of perspective, and his sense of humour. Arihant appeals to the invincible spirit in all of us, for he shares with us his strength and gives us the gift of hope and dignity to face the vicissitudes of life. This is what makes the book an absorbing, enthralling read.” Nonetheless, non-fans of speculative fiction, as well as those unfamiliar with Vedic thought & metaphysics may find themselves caught up in a web (if I may) of alien jargon. Though the complex writing style may not hold the attention of a rookie reader; for someone used to multi-layered narratives, it promises to be un-put-down-able.

NOTE: This review can also be read here.