Posted on March 21, 2016 by Cutting Loose Leave a comment

The sea has its moments, yes, but I don’t much care for Goa’s beaches. Nevertheless I gladly wash ashore ever so often for a change of scene and cuisine. Of which the latter, in my mind, remains her irrefutable raison d’être. Languor permitting I have successfully indulged in a spot of exploration in between meals. This is how I ended up making the acquaintance of three enormously ardent men when there a couple of months ago.

They have a whole lot in common. Other than that they are Goan, they share an

unimpeachable love for the place they call home. All three have expressed this deep-seated fondness in a most tangible manner. By single-handedly housing their object(s) of affection, indeed muse, in three extraordinarily distinctive repositories. And all three are self-funded. I talk of architect-conservator Gerard da Cunha, erstwhile medic-turned-installation-artist Subodh Kerkar, and restorer-curator Victor Hugo Gomes.

A much awarded professional who pioneered green architecture–think Protima Bedi’s stark-stoned gurukul Nrityagram in Bangalore–Gerard is the man behind a schooner-shaped Houses of Goa Museum precariously balanced on a traffic island in Porvorim. Within, the displays tell tales of the perceptible amalgamation of eastern and western influences in Goa’s structural heritage. From images of imposing mansions to imported 16th century tiles to tulsi vrindavans, this one promises to keep you indoors should you wish to play house with a trellised twist.

Visitors will find embellishing every wall, window, column and cranny of this curious three- 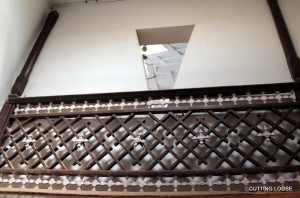 storey building, rare photographs, perspectives and sketches of Goan houses. Keeping them company are floor-standing glass-encased models. Doors, windows, palisades, building material and furniture, including altars and shrines, take up the mid-level. The topmost floor celebrates the coming together of two distinct architectures that resulted in the Indo-Portuguese style so unique to Goa. 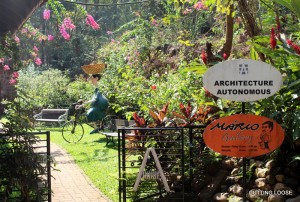 A happy hop away from here is the Mario Gallery where originals, prints, and related merchandise by the inimitable cartoonist Mario Miranda, of whose works Gerard is custodian, can be viewed and purchased. It fronts the architect’s office where a narrow garden hosts a larger-than-life likeness of one of Mario’s iconic characters. The toga-clad padeiro or village baker, a swiftly disappearing sight, sits astride a cycle bearing a trademark basket of freshly baked bread on his head. 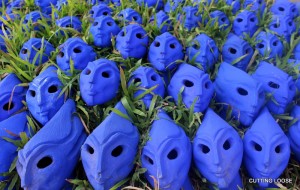 visual art by setting up the Museum of Goa (MOG) in Pilerne.  In response to queries about why he chose the least lucrative over the most minting, he is likely to quip that he was unwilling, after hundreds of years of it, to take any more scat from the British. A tongue-in-cheek reference to dysentery-struck tourists from England he regularly treated at his hospital in Calangute. Clearly their loss!

The expansive multi-level MOG, which also means love in Konkani, is dedicated wholly to

contemporary art, and has no permanent exhibits. It opened last year to a showing of sculptures, paintings, installations, and video art centred on Goa’s history. The ocean, from which Subodh himself derives much of his inspiration, is a recurring motif. He borrows heavily from the resulting navigational history–horses, old boats, oars, peppercorns, chillies–to fashion his prize-winning land art. 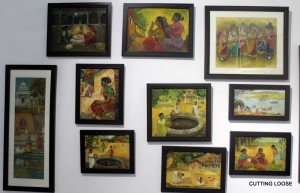 Taking up one corner at ground level is a catamaran in the original with a large Maui head affecting a bubblegum balloon. This, the artist’s satirical take on (d)evolution of the human race, going from a senses-led navigating Polynesian civilisation to a gum-chewing American one. Jostling for attention amidst Subodh’s brilliant works are some interestingly executed ones by talented newcomers. A slight departure from the prevailing subject though was found in a gallery dedicated to realist paintings by his father Chandrakant Kerkar.

restorer Victor Hugo Gomes into setting up Goa Chitra, an ethnographic museum in Benaulim. It is housed amidst a working organic farm and fashioned from architectural jetsam and flotsam from hundreds of traditional houses. The private collection, four thousand strong (and swelling) of restored trade tools, agrarian implements, and articles of daily use is a remarkable labour of love, as much of things antiquated. Holding centre-stage is a humongous, 16 feet high ghanno or oil grinder in wood.

Few years after, Victor wheeled in Goa Chakra. Another truly singular space crammed with all manner of non-mechanised carriages from around India. Some go back a century or so, and include beautifully decorated hand, horse, and camel-pulled carts. Differently-sized cradles, prams, palanquins, hearses, freight wagons, a jinricksha and cycle-rickshaw each, sit cheek-by-jowl with a sizeable number of artefacts related to the wheel. Also seen are a variety of spinning wheels. An elegant Victoria, a fashionable choice of transport back in the day, poses coyly just outside the entrance.

At the time of my visit, Victor was putting the finishing touches to Goa Cruti, yet another

section promising cultural cornucopia. This time around it came with a colonial makeover and the curator was more than happy to give me a sneak-peek. This assortment comprises clothes including priestly vestments, jewellery, furniture and crockery on the one hand; firearms, musical instruments, legal accoutrements and medical equipment on the other. It honour’s Victor’s longstanding companion, father-figure, and restorer extraordinaire, the late Jaswant Singh.