The Great Himalayan National Park (GHNP), covering an area of over 750 square kilometres, is located in the Kullu district of Himachal Pradesh, and is naturally hemmed in and shielded by snow covered ridges on three sides. It is contiguous with the Rupi Bhaba Wildlife sanctuary to its south-east, Pin Valley National Park to the north-east and Kanawar Wildlife Sanctuary in the north. Together, these areas constitute the Great Himalayan National Park Conservation Area – not just India’s youngest National Park, but also the nation’s most recent UNESCO-inscribed World Heritage Site (WHS).

Justifiably so, as the GHNP is one of the most picturesque regions in the Western Himalayas, 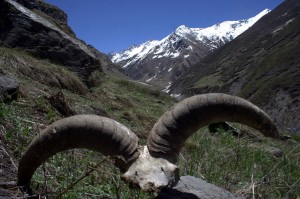 reputed for superb floral and faunal biodiversity, and encompasses a gamut of wildlife habitats that represent everything from tropical to alpine. The most outstanding feature of the Park however remains its abundant population of the endangered western tragopan – an elusive member of the pheasant family. Additionally, species such as blue sheep and snow leopard – typifying Trans Himalayan elements – can be found here.  Possibly because the Park is relatively undisturbed by frenetic developmental activities as elsewhere, even though sleepy hamlets like Goshaini, Nagini, Shilt, Shakti, among others, have in the past decade or so come awake to their relevance due proximity to the Park. 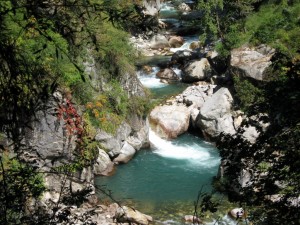 DEMYSTIFYING GHNP The Park’s pristine forests and alpine meadows encircled by lofty mountains have witnessed little human intervention since 1999, the year it was declared a National Park. The climate is typical of temperate and alpine regions of the Western Himalayas, and it experiences four distinct seasons. Snow fall occurs throughout the Park in winter with much of the eastern section perpetually under snow. Elevations in the area range from 1800m to 5200m with a major part of them above 4000m. The terrain is characterized by a number of ridges, deep gorges and precipitous cliffs, rocky crags, glaciers and narrow valleys. The GHNP is also an important source of water for rural and urban centres with four major rivers–Tirthan, Sainj, Jiwanal, Parvati–originating from glaciers within the Park and which confluence to form the Beas River.

Interestingly, the GHNP has merely seventeen percent of its area under forest cover; largely 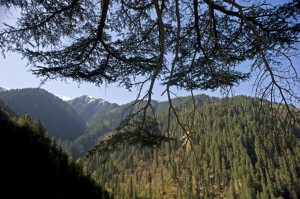 due to the predominance of high altitude meadows, and rocky snowbound areas beyond the tree line. Yet, some 832 odd plant species belonging to 427 genera and 128 families of higher plants have been recorded within the Park. Of these 794 species are angiosperms, 11 are gymnosperms and 27 are ferns. The forest consists of extensive Oak, Blue Pine, West Himalayan Silver Fir, West Himalayan Spruce and Himalayan Cedar or deodar. The broad-leaf forests contain Horse Chestnut, Rhododendron in lower altitudes, and patches of Birch at higher altitude. 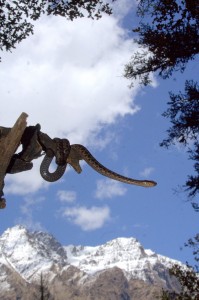 Some of the amphibians the Park hosts within its fold are the Himalayan toad, the stream frog and  Stolickza’s frog; the reptile species include the Kashmir rock agama , Himalayan ground skink, Karakoram bent-toed gecko (aka Kashmir rock gecko) , Eastern keel-back, Indian rat snake, and Himalayan pit viper. The Park also falls within a globally important Endemic Bird Area as a total of 183 bird species including 51 non passerines and 132 passerines have been recorded in this area. Five species of pheasants, notably the western tragopan, Cheer pheasant, Himalayan monal, koklas and the khalij, are found here. Of these the first two are listed as endangered. Other distinct bird species include the snow partridge, hill partridge and Himalayan snow cock. In addition to this faunal wealth, thirty-one mammal species have been recorded within the GHNP. They include other endangered species such as the very elusive snow leopard, Asiatic black bear, Himalayan brown bear, grey goral, Himalayan musk deer, Himalayan tahr, and the Himalayan serow.

OFFICIALSPEAK “The WHS inscription has brought us international recognition”, shares a

thrilled BS Rana, Director, GHNP. Elaborating, “Within a month of the announcement, there has been a massive leap in interest and queries from around the globe – suggesting a potential boost in ecotourism in the near future”. Still, a number of challenges stare the government in the face, primarily how to ensure locals become willing participants of the project. Though the Biodiversity Tourism & Community Advancement (BTCA)–a community-based organisation to help generate alternate incomes for villagers affected by the formation of the GHNP–has been making steady progress through its many collaborative activities, with numbers expected to swell, stakeholders will need to get on very quickly with capacity building of local communities.

An immediate cheer of exultation comes from environmentally conscious organisations long struggling to keep hydro-electric power projects away from the Tirthan valley.  News that has given even the trout population in the rivers flowing through the Ecozone something to grin about! There is no denying however the dynamics already at play with investors from outside the valley reportedly purchasing tracts of land in order to benefit from the appreciation that the WHS tag is sure to bring in its wake. A move that is unlikely to go down well with local representatives who, while welcoming the notification, wouldn’t want their efforts to safeguard traditional rights and preserve local culture to come to nought.

Protests have also been witnessed from those residing in Maror, Shakti and Shugad villages

set roughly 26kms inside the Park. They are unwilling to relocate as it will mean curbs on access to devta (local deity) ponds, grazing grounds, medicinal herbs, and day-to-day activities. “The inscription has put us on the world map and no doubt will provide a fillip to adventure and ecotourism. In turn, it will also help showcase the biodiversity and uniqueness of the culture here. But foremost is for us to address the apprehensions of the villagers.  Our endeavour will be to keep these three hamlets outside the purview of the project”, Rakesh Kanwar, Deputy Commissioner Kullu, allays their concerns.