Excavating The Story of Sirpur

Posted on February 16, 2015 by Cutting Loose Leave a comment 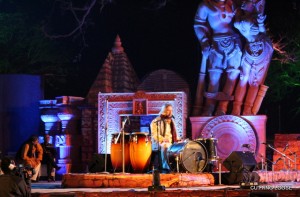 For a place named after wealth, Sirpur has clearly witnessed, is witnessing, vastly varying tides of fortune. This is one of myriad thoughts that flit through my mind as I sit watching the third edition of the Sirpur National Dance and Music Festival (16th-18th Jan) unfold before me.

An earlier visit in September last year had found the place crawling with toiling workers feverishly undoing the handiwork of a thoughtless instruction–the engineering of a massive boulder-lined pool, purely cosmetic in purpose, with no natural source of water to nurture it. The erstwhile water body now housed atop its fuller form a teeming audience held in absolute thrall by Taal Chhattisgarh, a performance marked by percussionists from the state’s indigenous communities keeping beat with ghatam, bhapang, kanjira, and tabla musicians, as well as award-winning multi-percussionist Pete Lockett. 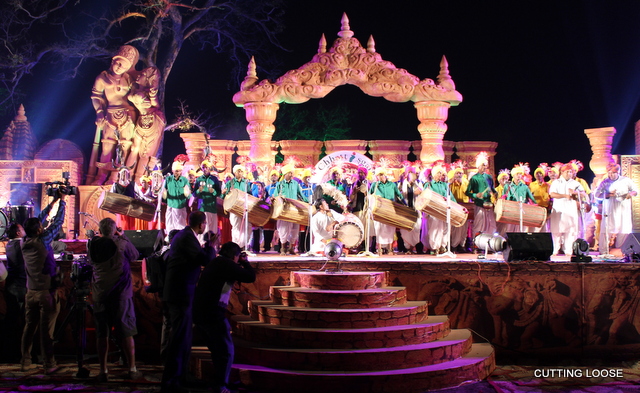 Over three days the kitsch-strewn strobe-lit stage, which regrettably obliterated the beautiful light-accented Laxman Temple from view, compensated manifold by hosting many an artiste extraordinaire, from local groups enacting Dewar Geet in honour of folk heroes to Danda Saila Nritya to celebrate the advent of spring and renditions of Panthi Nritya by the Satnami sect. 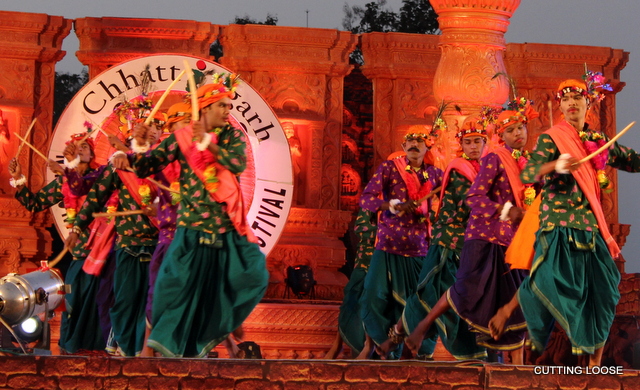 The credit for chancing upon the subterranean existence of Sirpur in 1872 falls to JD Beglar, an assistant of the Archaeological Survey of India (ASI). He reports the remains of 10 mostly Vaishnava temples and three partially damaged ones, of which the Laxman Temple we now know represents one of the finest in sculpted-brick shikhara temples from the seventh century. 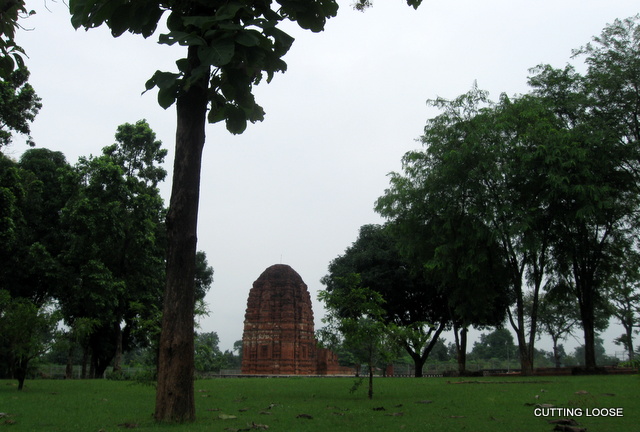 He also reports finding sculptural remains Buddhist, Jain and Hindu in form and style. Till Beglar’s arrival, this once flourishing capital of the Dakshin Koshala (now Chhattisgarh) kingdom had rested in relative oblivion since the medieval period, when an earthquake or flood or conflagration is conjectured to have wiped out its monumental existence. 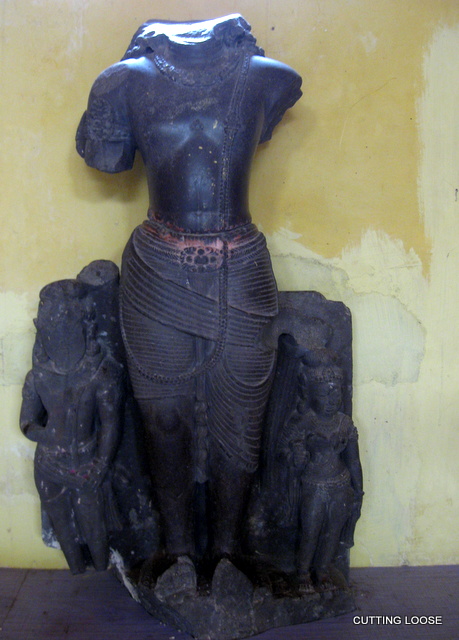 A decade later Alexander Cunningham, first Director General of the ASI, would reiterate the existence of the Gandeshwar Temple dedicated to Shiva on the banks of the Mahanadi; it continues thus. He mentions another edifice, Surang Tila, as perplexed about its raison d’être as visitors today. Some suggest Shaiva origins; the shrines atop its 8m-high pyramidal structure certainly support that theory. Except that its restructured avatar looks startlingly Mayan than ancient Indian–most unlike others of its ilk or era. 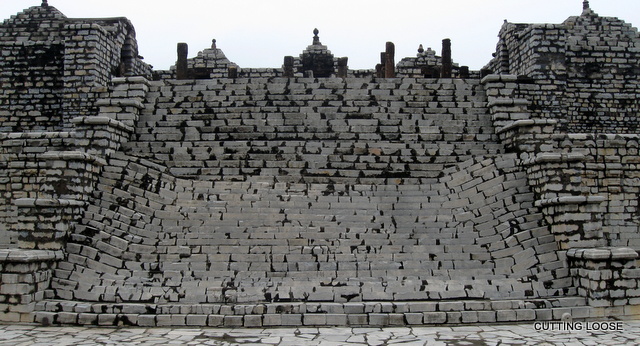 It wasn’t till the 1950s however that Sirpur’s prominence as a centre of Buddhist learning was re-discovered. Excavations during that period unearthed the Anand Prabhu Kuti Vihar said to hark back to the 7th or 8th century. A 2m-high likeness of Buddha in the bhumisparsha pose was found here and can be viewed alongside the lotus-bearing Bodhisattva Padampani in the sanctum. 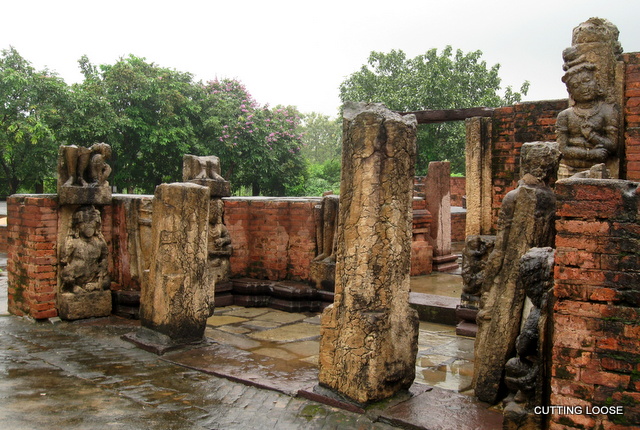 Nearly half a century later archaeologists would stumble across the massive Teevardev Buddha Vihara–a complex of monastic buildings in near-original form. The expansive premises enclose within them remains of a nunnery and two monasteries, one of which is home to the monolithic image of a seated Buddha accessed through a brilliantly carved stone doorway. The flights of steps are indicative of more storeys than one to house the hundred-odd monks, and as many nuns, historians believe once resided here to receive their instruction. 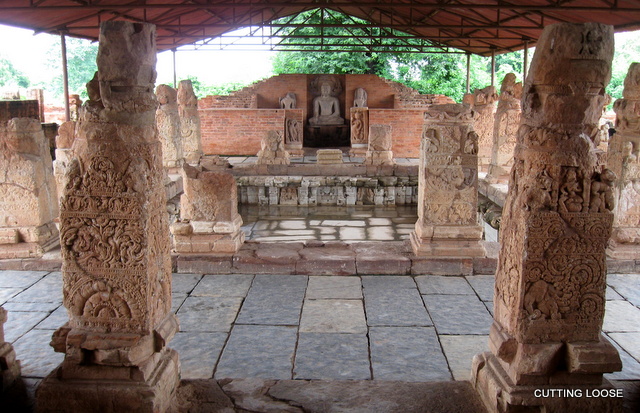 This discovery validates in part Chinese pilgrim Hieun Tsang’s mention-in-passing that many thousand Mahayanists practised their faith across Dakshin Koshala when he visited the kingdom during his travels in an India ruled by Harshavardhan, circa 7th century. More recently, two visits by His Holiness the Dalai Lama in as many years to this somnolent place have got the faithful taking note, here and overseas. Curiously, despite empirical evidence of its own historicity, Sirpur appears to be borrowing heavily from Hieun Tsang’s Nalanda narrative. Why it needs to piggyback on a distant cousin’s glory when it can well hold its own is quite baffling. More so, as a gazillion stories find resonance in every dressed and sculpted stone at every one of near 50 digs (and counting) unravelled here thus far. 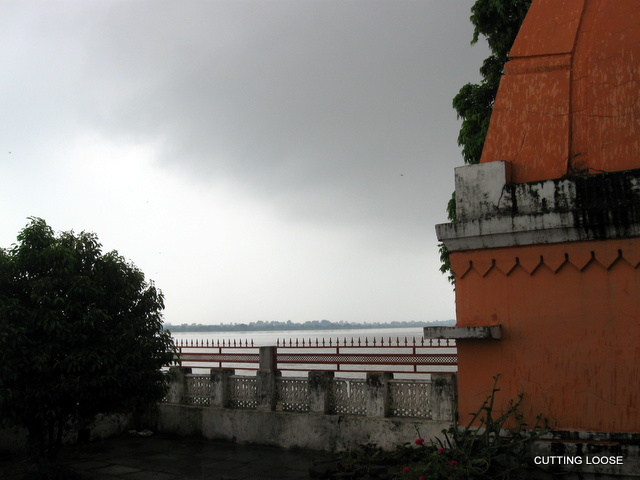 Note: This article has earlier appeared in The Huffington Post.