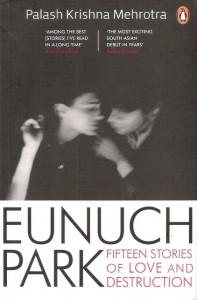 The  first thought that came to mind after I finished reading Palash Krishna Mehrotra’s collection of short stories was: Does man choose his environment or does environment choose the man? Having acquainted with the author, not very long ago, at his way-past-sell-by-date digs in a tony south Delhi locality, I would have imagined it was the former. A wiry, bespectacled frame, given to restless pacing while sharing witticisms, he had observed with some conviction that the grimy, run down warren of rooms he shares with sundry housemates was, in fact, brimming with character. Unwilling to endorse his view even as I took a closer look at the peeling paint, the shoddy woodwork and the fading upholstery, I was quick to dismiss it as a flippant remark.

But that was before I read Eunuch Park: Fifteen Stories of Love and Destruction. In retrospect, it could have been the perfect backdrop for any one of his characters to realise the darkest fantasies haunting their tortured souls. For, tortured souls, nay, tortured male souls, cynical and irreverent, are the author’s metier. Evidenced clearly from the ennui-engulfed protagonist of Dancing with Men, the resentful cross-dresser of In The Nick of Time and the lovelorn teenager-turned-go-between of The Farewell.

Take the matter-of-fact murderers in Fit of Rage: Chotu, the hired help, and Sadiq, the rickshaw-puller who remorselessly plot the end of the former’s employer, an old lady, albeit a hard taskmaster. While Manik, a young tenant, already on the run for knifing to death his girlfriend in a moment of uncontrolled anger, looks on at the happenings through a ganja-induced stupor.

Eunuch Park, the title story, underscores the angst of a young couple desperate for some intimate privacy. Believing the park to be a safe haven from prying eyes, they are proved otherwise as greedy, territorial eunuchs hound them out. Okhla Basti, The Teacher’s Daughter and Freshers’ Welcome are all insightful accounts about the shunned, as the author delves deep into the minds of outcasts living on societal peripheries. Palash Mehrotra’s heroes usually inhabit seedy, ugly environs, from boys’ hostels to train bogeys, to dingy bars. Yet, even as they display a certain air of abject aimlessness, they appear not to resist any opportunity to experiment, when it comes to their own sexuality. Or drugs. Or violence.

Through his earlier attempt, as editor of Recess: The Penguin Book of Schooldays, an anthology of absorbing essays, stories and poems, he had forged a nostalgic connect between the reader, and the essential ingredients that make up school life: tyrannical teachers, budding sexuality, parental conflict, growing up blues.

While in Eunuch Park, written in a slick, urban style, the author has consciously chosen the short story format to hold up a grainy, monochromatic mirror to the disturbing realities of a multi-cultural India. An India, that drew him like a magnet. An India, he was not afraid to embrace. An India, he refuses to be judgmental about. Here, finally, is a riveting encounter with the male psyche, revealed through the eyes of a brutally honest writer. The experience is up, close and personal. Don’t miss it.