Posted on October 3, 2010 by Cutting Loose Leave a comment

Then there was that supremely fiery ema darshi, Bhutan’s national dish… cooked variously with peppers, potatoes and mushrooms.  It seemed only fair that after a 4-day steady diet of dust, grime, fumes, mobile oil, bangla meters, odometers, tulips, TCs, PCs and the like, the weary participants of the 3rd Indo Bhutan Friendhip Rally would now wish to tank up on some tipple. The Zone was a unanimous choice for our last round of drinks together in Thimpu (cleverly dubbed as the winner’s treat so that Thinlay would pick up the tab!!)

Going down a mental checklist of stuff-to-do, I turned to Choki to whine about lost 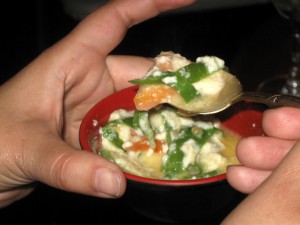 gourmet opportunities (read: a taste of the promised ema darshi). Too late, everyone commiserated, before going back to their respective conversation and Kesang to propping up an aching head! It was close to 2 am after all. Sonam diverted my attention to a colourful tome about things Bhutanese. So yes, we all forgot about the ema darshi.

But not Choki. Using arm-twisting methods that work only on very dear, long-suffering friends, she had the owner rush after the chef already on his way home following lights-out in the kitchen. Cut to the chase: halfway through the narration of the Fable of the Four Friends, a bowlful of this cheesy delicacy of colourful peppers was placed in front of me with a flourish. Squealing in delight, I spooned the delicious contents of the bowl into my mouth. Looking up from my greedy occupation, I felt the same sets of watchful gazes and widening eyes trained at me as earlier. Deja vu! What now? Looking out for smoking ears, said grinning visages.

Oh boy, was I going to disappoint them again?