Delhi to Tirthan Valley: Rain in the Hills 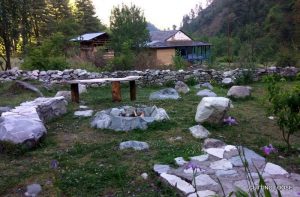 In the 1972 travelogue Kulu: The End of the Habitable World, Penelope Chetwode recounts her mule trek from Shimla to Rohtang (13,050 feet) over the Jalori Pass (10,300 feet), a detour to Khir Ganga in the Parvati Valley, and eventual return to Shimla across Bashleo Pass (10,800 feet). This chronicle of an arduous albeit adventurous journey, undertaken in 1963, unveiled for curious travellers the less explored regions of the Inner and Outer Seraj Valley. Today, the valley’s Great Himalayan National Park, a UNESCO World Heritage Site, is a huge draw.

The journey is a whole lot less taxing nowadays, as a few friends and I, yearning cooler 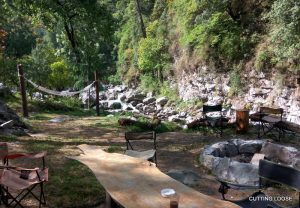 climes, discovered over a long weekend from Delhi. Barnagi, a charming hamlet sandwiched between Goshaini and Bathad–the roadhead from where the Bashleo trek begins–was our destination. Edged by the trout-rich Palachan stream that merges with the Tirthan River downstream at Goshaini, Tirthan Anglers’ Retreat turned out to be a delightful choice for its elevation, quietude and picturesque setting. More so for travellers worn and weary from an overnighter from Delhi, even though the bus was a comfortable one. 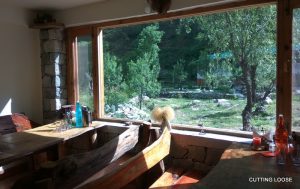 A refreshing hot shower, homely lunch and deep snooze later, we left our cheery rooms to regroup in the dining-cum-lounging room overlooking the stream. An unsuccessful bout of angling, professional guidance notwithstanding, and an overcast sky saw us hurrying indoors for rejuvenating sundowners, snacks and a delicious dinner. We slept to the sound of pouring rain, as had been forecast.

Morning was no better, but it did not deter our plans of driving to Jalori Pass (32kms), even 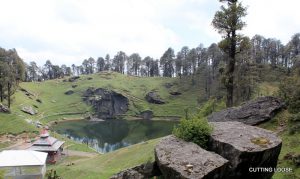 though the radiating moderate hikes to Serolsar Lake or Raghupur Fort were unlikely to fructify. Buttressed by hearty breakfast, armed with umbrellas, sturdy walking shoes, cling-film wrapped cameras, and an upbeat mood, we trudged up the mud path to the road where our locally hired 4×4 SUVs (Rs 3000/return trip) awaited us. The two-hour drive wove through the congested bazaar of Banjar (20kms), with the landscape turning alpine soon after Jibhi. The minty-green blades of the wild iris carpeted hillsides, awaiting warmer temperatures to burst into mauve efflorescence. 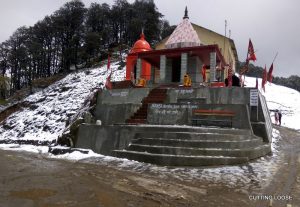 The rain had petered out meanwhile and the vistas turned increasingly spectacular as we closed in on Shojha, 5kms short of the Pass.  Hereabouts, our attention was drawn to a momentous twist in the tale–unseasonal snowfall. Even as we watched, a powdery white cloak settled on distant peaks, grassy meadows and lofty conifers. We arrived at the Pass to find the cluster of slate-roofed dhabas and a vermilion-hued temple also wearing a fresh layer. We were ravenous. It was only after a round of roasted peanuts, Maggi, omelettes, tea, kadhi- or rajmah-chawal, and besan ki barfi that we eventually emerged, as did the sun, to capture the customary selfie, and more.

The charming colonial-era dak bungalow at Khanag, less than five kilometers beyond Jalori, 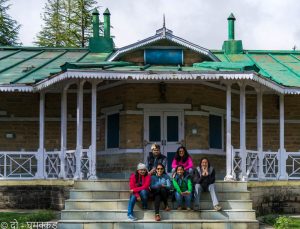 houses a commemorative plaque in Penelope Chetwode’s name, who had died in the vicinity while leading a tour in 1986. It was only befitting we pay homage to a fellow traveller before heading back to the promised bonfire-side barbecue. A kettle of Himalayan griffon vultures held us spellbound with a magnificent aerial display, even as we sipped masala chai provided by the resident chowkidar. Back at the retreat, after witnessing a resplendent devta procession winding its way to the annual mid-May mela at Banjar, it was a happily tired bunch that packed and prepared for its return to Delhi the following morning.

Note: This article has earlier appeared in Livemint.