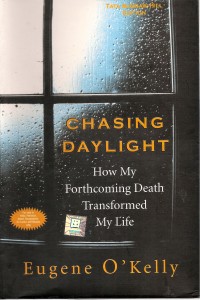 Eugene O’Kelly was the Chairman and CEO of KPMG, one of the largest accounting firms in the US. With giant companies such as Citigroup and General Electric as clients, he was a man on the go driven entirely by business. Here was a man who once flew across the world, took a connecting flight, and seated himself beside an equally busy business prospect, so that he could pitch a sale. Needless to add, he clinched the deal. His life ran with clockwork precision just as he wished; all the while drawing happiness from a supportive and loving family. And golf.

Until the summer of 2005. Following a particularly poor round of golf due to vision, and a noticeable droop in his cheek a few weeks later, a much-delayed visit to the neurologist and further tests revealed late-stage cancer of the brain. Eugene O’Kelly had three months to live. And, he thought he was blessed.

Chasing Daylight is an account of those last months in his own words. It is the story of grit and determination when faced with a no-win situation, heightened visibly by the author’s awareness of this. It is the story of a person who as a CEO had the ability to see the bigger picture, deal with a wide range of problems and plan for exigencies. A person who used the same skill sets to assist him in preparing for his imminent death. He considered it his last project and hoped to make it a positive experience for those around him – his wife Corinne, daughters Marianne and Gina, his immediate family, lifetime friends and close business associates. He did not forget to include those people who were friends because of shared experiences or shared passions; those who may have enhanced his life and vice versa. He called it Unwinding.

I wouldn’t be fooled by the matter of fact tenor of the narration. The tone belies the pain and turmoil that he and his family lived through in the emotionally-wrought days preceding his death. He admits as much. While he may have adjusted to his rapidly deteriorating condition and occupied his time with a to-do list – which included putting his legal and financial affairs in order and planning the funeral – his family found even the thought of his illness insurmountable.

Chasing Daylight offers a lot of food for thought to the discerning reader. It is a remarkable tale told with a never-say-die attitude, literally, and guarantees a thought-provoking read even for the quick-flip reader. While it allows a peek into the mind of one very unique individual, it does not, however, offer an understanding of others’ in comparable circumstances.  Nor does it assist one in coping with personal losses of a similar nature. It is not a self-help guide. Because, there just aren’t as many answers as there are questions once you’ve turned the last page. Such as, can knowledge of one’s death really be approached in this manner? Is there any way, really, to prepare for the unexpectedness of it all? After all, que sera, sera? The jury is definitely still out on that one.