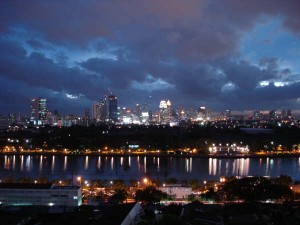 It was a spur-of-the-moment thing to do, my visit to Bangkok in muggy mid-summer. Allow me to recount the events that led to it. First off, the pressing cause. The winter months had done their predictable damage—extra kilos—resulting in the inevitability of a “larger,” albeit low-cost, wardrobe. This quick-fix option won hands down over the other healthier, that is to say, rigorous one of slaving over fitness machines. Furthermore, the discovery of an about-to-expire ticket amongst long-overdue bills (where else) and the promise of a hassle-free visa upon arrival were both interpreted as encouraging signs. Finally, a catalyst manifested itself in the form of a shopaholic friend who was looking for a break from, well, shopping in India.

In queue for a taxi at the Bangkok International Airport, I was struck by the oppressive

waves of humidity just as relentlessly as my compunction at our madcap decision to visit at this inopportune time. Yet comfortably ensconced within the confines of our fifteenth-floor service apartment overlooking the Queen Sirikit Convention Centre and its adjoining lake, chilled Singha beer in hand, I would have a very speedy change of heart.

Right at the onset, let me dispel any fallacies vis-à-vis the objective of this visit. It was no pretentious broadening-your-horizons kind of trip. Nor a long-time-no-see visit to relatives you would rather not see for long times. To all intents and purposes, it was nothing more, nor less, than a shopping expedition. Consequently, all unsolicited advice on cultural-things-to-do and historical-places-to-see was discarded the very instant it was proffered. As were all the nudge-nudge, wink-wink advisories by our male friends. (Regrets to all concerned.) 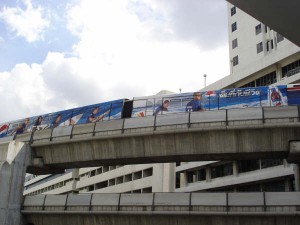 The Official Map of Bangkok assisted us greatly in our mission, as did the rains. While the former boldly highlighted in canary yellow all the shopping regions in the city, the latter’s incessant occurrence ensured our permanent presence indoors: inside malls, inside hotels, inside wholesale markets, inside food courts, and increasingly, inside the magical Skytrain. Not only did this wonderful creation transport us into, above, or under popular shopping centers, it also made traffic jams, water-logged streets, and crooked cabbies disappear with the swish of a closing door.

The sois, or streets, of Sukhumvit were the first to catch our interest. By virtue of its 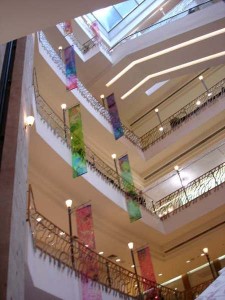 proximity to our hotel, we could avoid the customary haggling with taxi or tuk-tuk drivers by simply taking a motorcycle taxi. Seated behind an orange-vested back as it ferried me to my destination at the speed of lightening through crevices that required blubber-like limbs, I frantically tried to recollect if my insurance policy covered death by daring-do. I am convinced that the aftershocks of the-gone-in-sixty-seconds-ride lasted a lot longer. How else do you explain the lack of a single buy despite hours of browsing through cheap clothes, cheap accessories, cheap electronics, and even cheaper “antiques”? All things considered, a very disappointing excursion, except for our surprisingly affordable lunch in the café at the Emporium, a very new and very up-market mall.

Next, we hit the malls and stalls on Ratchadamri Road, followed by those on the Phetchaburi Road. These roads intersect each other roughly in half, at ninety degrees, to form a cross displaying a cornucopia of sensual delights. Juxtaposed alongside shopping centers such as the Central World Plaza, Gaysorn, and Big C, we found the very vibrant Pratunam and Indra Markets, a warren of alleys swarming uniformly with merchandise, shoppers, and street-food vendors. Wholesalers offering precious and semi-precious jewelry sat adjacent to dealers selling Louis Vuitton for less than twenty dollars. Shops dealing in silks, textiles, costume jewelry, shoes, handbags, sunglasses, watches, t-shirts, jeans, and cosmetics virtually jostled each other for elbow space. 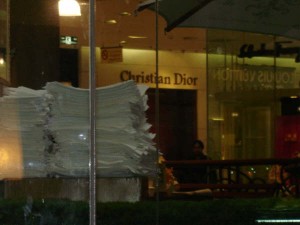 That evening we visited Patpong, famed as much for its naughty nightlife as for its night markets. Hoping to pick up some more bargains, we were in for a rude shock. While the wares were pretty much the same as elsewhere, they were fabulously overpriced. Even expert negotiating (we’re Indian) could not get us satisfactory rates. All the same, it was a learning experience, in the sense that we discovered the existence of graded fakes. I’ll explain. A high-quality impersonator of a designer product, say watches, could make you poorer by $150, or you could walk away with a totally compromised version of the same for under $10. Amongst the shoppers’ fraternity, folklore abounds with harrowing tales of encounters with ‘dupe’licity— the state of being wherein ignorance and an overwhelming eagerness to sport designer wear leads to the purchase of dubious goods at the cost of genuine ones. Beware.

My friend and I were desperate. We were nowhere close to our target of three bags full each. A few souvenirs, some trinkets, and very many promotional freebies were all that we

had for our efforts. We began to accost the female staff at our hotel for information on where they shopped before waylaying smartly turned-out ladies on the streets. Some suggested Khao San Road, some the Chatuchak weekend market, while others referred to ones we had previously visited. One name, however, kept cropping up time and again: Mah Boon Krong Centre, or MBK as it is popularly called. A quick browse of the place confirmed that we had hit jackpot. Deciding to meet at the food court for meals, we commenced our day-long exercise with a vengeance never experienced before. Six levels of quality clothes, shoes, jewelry and accessories, cosmetics, handicrafts, and even furniture, were up for the taking at unbelievable prices. We went up, we came down. We turned left, we turned right. We bargained. We bought. We cajoled, we protested, we bought. A hurried lunch had us exchanging notes and mentally filing away value-added tidbits on where to locate larger clothes, smarter shoes, cheaper handbags, and lacier innerwear. Coffee break had us pooling our resources. Dinnertime had us exhausted.

You could be forgiven for mistaking Khao San Road for a set of the Hollywood film The Beach, featuring Leonardo di Caprio, because a part of it was shot here. This area, located in old Bangkok, is accessed via the red-and-gold hued streets of Chinatown. Hailed as a backpackers’ delight, Khao San was much too touristy for our purpose. Teeming with internet cafés, hotels, travel agencies, over-rated goods, touts, and westerners galore, it did not take us long to beat a hasty retreat to the familiar surroundings on the other side of the Chao Phraya River. 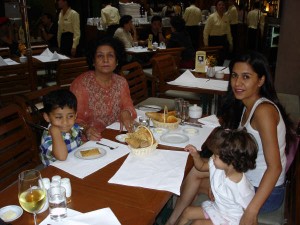 The weekend brought with it the mother of all such markets: the Chatuchak Weekend Market. Spread over thirty-five acres and consisting of over fifteen thousand stalls, this is the place for great buys once you decide to battle the wilting heat, the milling crowds, and the unpleasant smells. Specially designed maps facilitate you in identifying areas of interest depending on the diverse types of goods for sale, which include household accessories, religious artifacts, handicrafts, food, live animals, and plants. It is also the singular market in Bangkok where you can be assured of high-quality Thai produce at extremely competitive prices. You go, girls!

Our last day in Bangkok was spent arranging, re-arranging, packing, and unpacking; all the 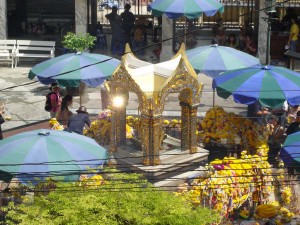 while, squealing in delight at some great bargains and remorsefully sighing at other not-so-great ones. Even so, it was one hell of a trip, we concluded. To celebrate our success, we went to the delightful Suan Lum Night Bazaar for one last Singha. This we drank seated in a simulated biergarten, watching People Like Us weave their way in and out of more shops, precariously balancing…wait a minute, where did they get that?