Then there was Cacao, that delightful oasis in the midst of tea-land. Located just off the pedestrian-only section of the old-worldly MG market in Gangtok, it was discovered by my highly charged and (temporarily) caffeine-deprived olfactory sense. Exactly what the doctor had ordered for a weary visitor limping her way along the quaint, almost anachronistic, shop-fronts of a homogeneously painted marketplace. I say limping because I was returning from Nathu La with a nasty sprain, as a sort of a painful reminder of an otherwise near-nirvana episode. 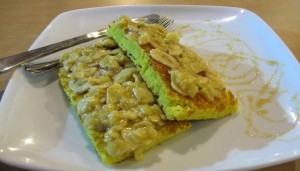 A cappuccino has never tasted, nor looked, as welcoming as the one placed before me that 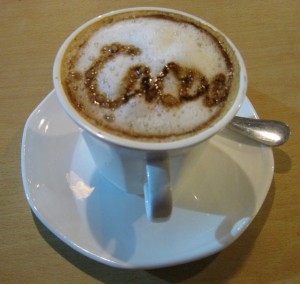 day. While a lot can be said for frothy calligraphy, it took me no time, nor remorse, to decimate the artwork in one giant gulp. Heaven. Mirrored closely by their crumbly Danish pastries.                                               By way of quality, quantity and taste, their banana pancakes followed closely on the heels of the carbonara and club sandwich. Fluffy, warm, well-done and topped with a generous layer of the fruit drizzled with honey, I for one can’t imagine a more delicious way to start a morning. Or, end an evening??

During a week’s stay in Gangtok, Cacao became my preferred any-time hangout, beginning with breakfast, to the elevenses, through lunch, tea-time and dinner. Not 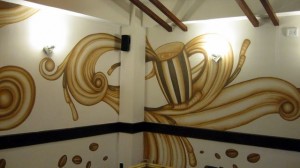 necessarily on the same day. Come aawnn, what were you thinking?! The stylised wall-art and cheery interiors coupled with a young and friendly work-force was an invitation I was hard put to turn down.That, and the view of course. As delicious as the fare on the menu. Snapped the usually shy Mt Kanchenjunga peeking out from behind ascending clouds one fine morning… 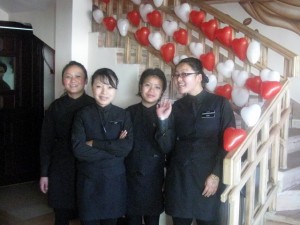 With Valentine’s Day but a few days away, the staff were enthusiastically preparing the place, and perhaps themselves, for the big event. In between serving and clearing tables, the girls kept busy blowing out balloons. Not very successfully, I gathered from the number of pops followed by squeals that reached my ears! Hard work had paid off, however, as on the day I was to return to Siliguri, I stepped in for one last cuppa to find Cacao prettily infused in red, pink and white.  A real romantic send-off, if ever.