It can get awfully frustrating for a foodie who finds herself in lands bequeathed abundantly with innate splendour peopled by a friendly lot yet woefully inadequate far as palate pleasures go. True story from my visit to Chhattisgarh last month. Naturally, I am not talking about traditional cuisine here–as elsewhere, there are innumerable variants of rice (chilla), wheat (khurmi), grams (thethri), and vegetable (pyaaz bhaaji) preparations. I refer mainly to quick bites, food-on-the-move, street-side savouries; energizing stuff to take you through long days on the road. Honestly, how many bananas–boiled peanuts, even–can one eat? 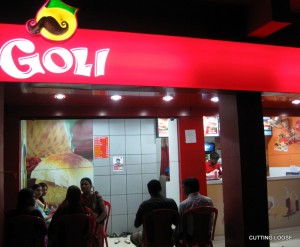 popular fast-food chains and the like)where a dynamic business community comprising Punjabis, Sindhis, and Marwaris has resulted in a line-up of vegetarian and non-vegetarian multi-cuisine restaurants dishing out garam-masala-laden versions of, well, everything. Sure, you have the odd samosa fella, the pav bhaaji guy, the jalebi and poha-walla that salivating locals will recommend to you. Usually found at bus-stands/railways stations, busy chowks, bazaar innards, and rush-hours; not when you could be going to/returning from catching first light on amorous couples sculpted-in-stone in some remote neck of the woods. In the end, an endearing green-topied, curly-moustachioed, big-moled Marathi manoos came to the rescue.

Though I completely missed him in the capital city, he made known his presence in pretty much every town– Bilaspur, Ambikapur, Kawardha–that I visited in the north of the state. Meet Goli Vada Pav–a chain of cheery brilliant-red kiosks selling my absolute favourite snack of all time!  The menu listed the classic with cheesy and spicier versions alongside mixed veggie and Schezwan. That they opened early and closed late ensured I haunted Goli outlets for sanitised fast-food every time I missed a meal. An intrinsic part of Mumbai street-life, the vada-pav has assuaged many a hunger pang across- the-board; ceaselessly at the breathtakingly busy Dadar Station to the till-stock-lasts up on Malabar Hill. Mine in Chhattisgarh.