A Barbarian In Asia 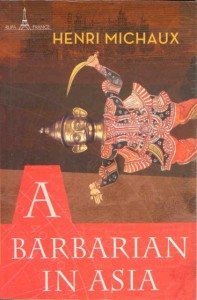 Nothing accords a travel enthusiast more excitement than getting a chance to read the experiences of a fellow traveller. The period, place or purpose of travel is completely immaterial. With an unshakeable belief in the famous maxim by Lao Tzu, ‘a good traveller has no fixed plans and is not intent on arriving’, I prepared myself for a virtual journey alongside Henri Michaux with A Barbarian in Asia. I read the book not once, but twice. Both times I came away with the same impression. It’s a tome that says a lot but reveals little.

The English translation of Henri Michaux’s Un Barbare en Asie has been presented to the Indian readership courtesy Rupa France, a compilation co-edited by the Cultural Service of the Embassy of France and Rupa & Co.  This effort is an acknowledgment of the fact that modern French literature has yet to find its place in India, or is exorbitantly priced, if available. Alongside classics, those interested in the literary landscape of twentieth century France, also have the option of acquainting themselves with voices hitherto unheard.

Written as a journal, and recounted in a somewhat unique manner, this work, however, does not offer much beyond general observations—and many contradictions—about the countries the author visited and the races he came upon. Barely thirty when he traversed the Asian continent in the 1930’s, his annotations are at times derisive—mostly, disturbing. Possibly unable to comprehend other cultures, so very diverse from his Western way of life, he takes recourse in politically incorrect humour; which, while serving as a reflection of another point of view, rarely makes you laugh.

The writer describes his encounters with the ‘yellow races’ of India, Ceylon, China and Japan in a staccato style, oscillating between topics and events; in no particular chronological order, either. His most animated noting is about the Japanese. It is also his most irreverent. Sample these: ‘The men are ugly, with no sparkle. They are sad, wasted and dry, with the look of petty clerks without a future…’ ‘The women look like servants…’ ‘An insular mentality, uncommunicative and proud’.  Preceding this section, you are subjected to similar gems equally mocking of the Indians, the Chinese and the Ceylonese. The publisher’s note informs us that although this is the original version, Henri Michaux did tone down some of his condescending views, particularly those on Japan, in subsequent editions.

Read ‘A Barbarian in Asia’, if you must, for some very surreal impressions of a maverick adventurer. But don’t forget that pinch of salt.