A sorority-of-sorts reunion long in the making finally fructified this summer past. Siblings and school buddies decided to get away from it all for some rejuvenation. Given the relentless May swelter our respective cities of residence experience, an escape to Himalayan havens was a unanimous no-brainer. Besides, I was returning after a scorch proper from Ujjain where I had been parked for two weeks acquainting with the Simhastha Kumbh. 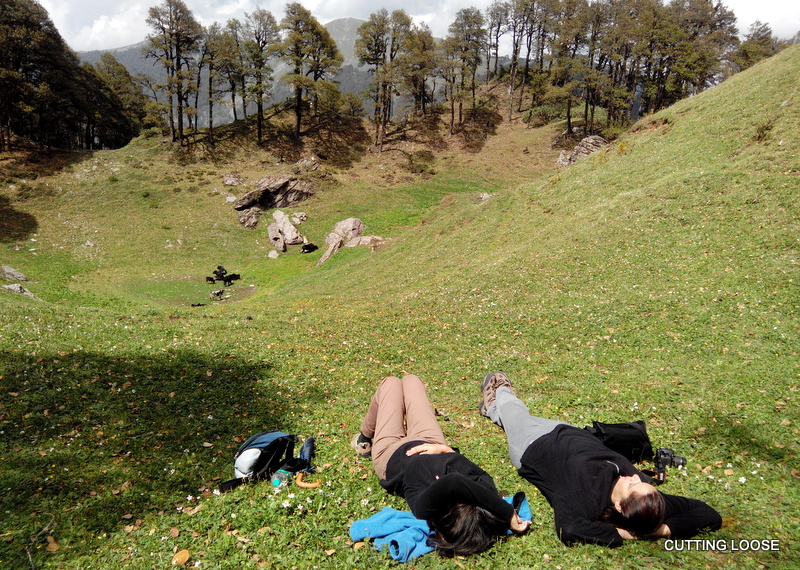 Given, also, the propensity of such gatherings to metamorphose into utter madness, seclusion amidst nature was a mandated qualifier for accommodation. So as not to subject other guests to the expected shenanigans and giggle-fests of a bunch of 40-somethings (one near-60-something) when letting their (salt-and-pepper) hair down. We zeroed in on Tirthan Anglers’ Retreat, new kid on the block in one of Himachal Pradesh’s largely unspoiled valleys. 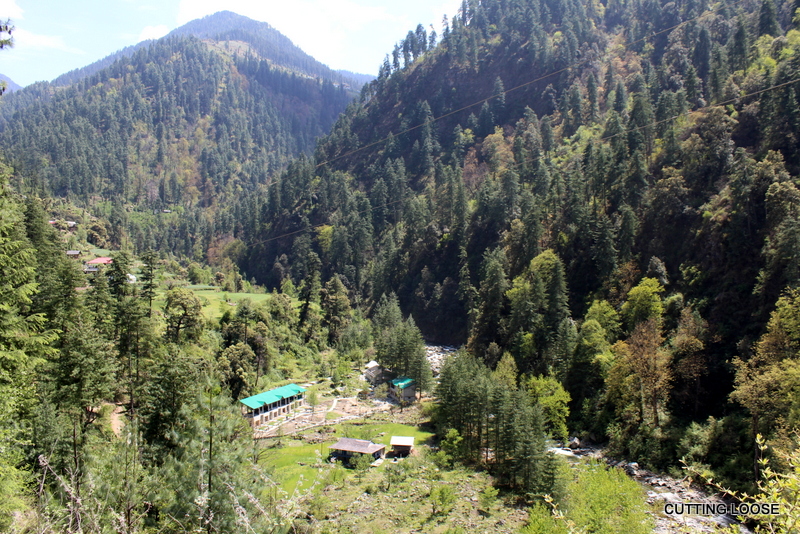 We pretty much had the place to ourselves when we got there. Squabbles over who called dibs on which of the six brightly furnished rooms was clear indication not much had changed for this lot since school days. Even as our young host looked on patiently while his staff played musical baggage.  What finally clinched it was that all rooms, lined-up soldiers-like in a row, were equipped with the same outstanding view, tiny patch of green and stone sit-out. 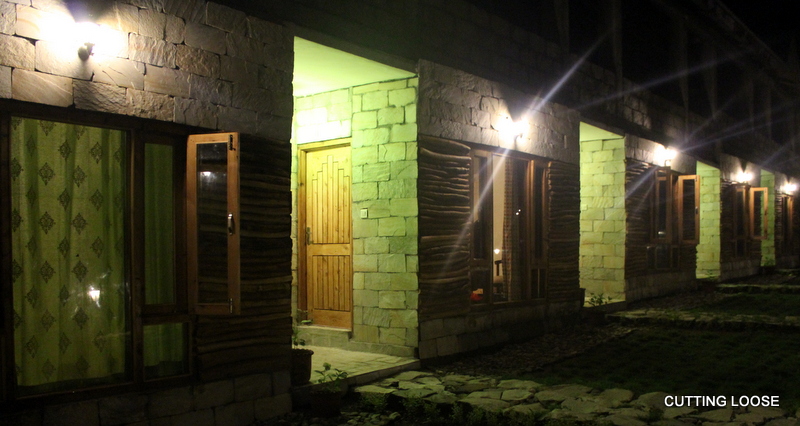 Also, since none came with room service, proximity to the kitchen was rendered inconsequential right away. A blessing in disguise, really, for the brookside dining space with its massive sun-streaming picture-windows was to become a favoured hangout. When not cooling our heels (and beer bottles) from boulder-y perches in the Palachan stream raging past. When not using the wooden counter of the outdoor bar for a gratifying sun-soak-cum-snooze. When not lost in thought, chants, or print, in some leafy nook. 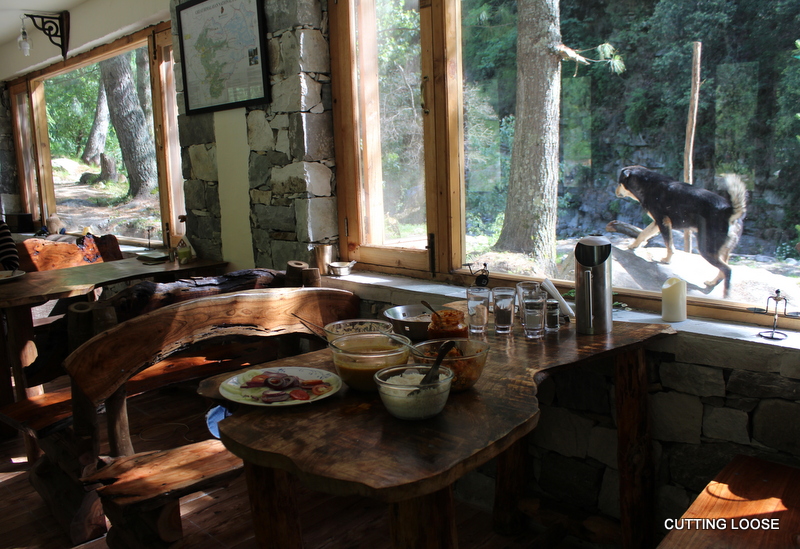 Another delightful discovery was the no-network sign on our devices. We could chatter, argue, rib and reminisce that much more; we did. We often walked up the short path to the road to grab a quick chai or chat with local folks. One time we trudged to Bathad, the road head some four kilometres uphill from the retreat, also where the Bashleo Pass trek commences/ends. It brought on a ton of nostalgia for us schoolmates about a trekking adventure back in the day. In honour of that memory, the caretaker at the British-era rest-house still in use by the alma mater treated us to tea and pakoras. Never tasted better. 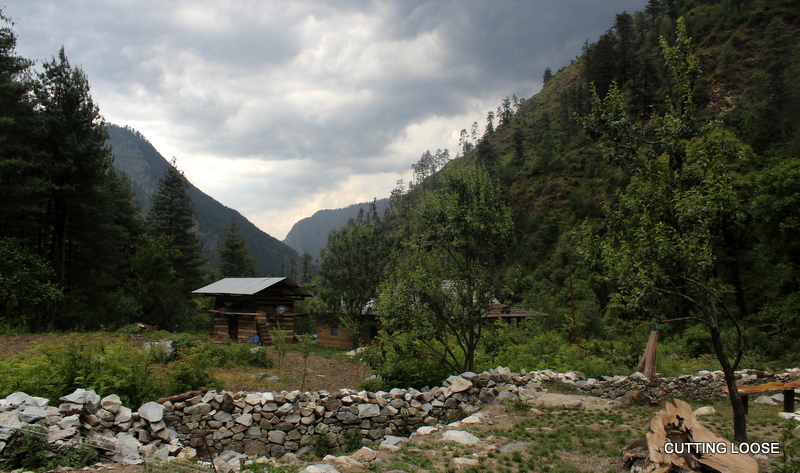 Paucity of time, not to mention varying degrees of fitness, dissuaded us from an initial excitement-fuelled and over-reaching plan to attempt the Bashleo Pass trek. We did however manage to throw in an invigorating hike to the Serolasar Lake from Jalori Pass.  This required us to drive two hours to the pass one early morning, savour a breakfast of omelettes, buttery toast, and tea at a cluster of dhabas there, before setting out for the lake six kilometres away. 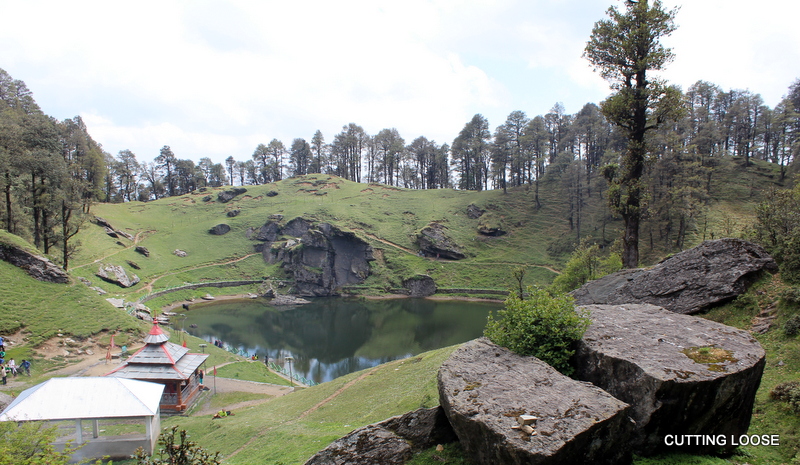 The trail is mostly steady with gentle swells punctuated by a couple of steep, stony stretches where it narrows down considerably. It slices through dense woodlands of birch and cedar before opening into cow-grazing meadows. Where massive rock outcrops support mud shelters for shepherds and sadhus alike. Birdsong trails you most everywhere. The lakeside temple witnesses a fair number of footfalls and we found us overtaken by fervent folk, some barefoot, headed that way. 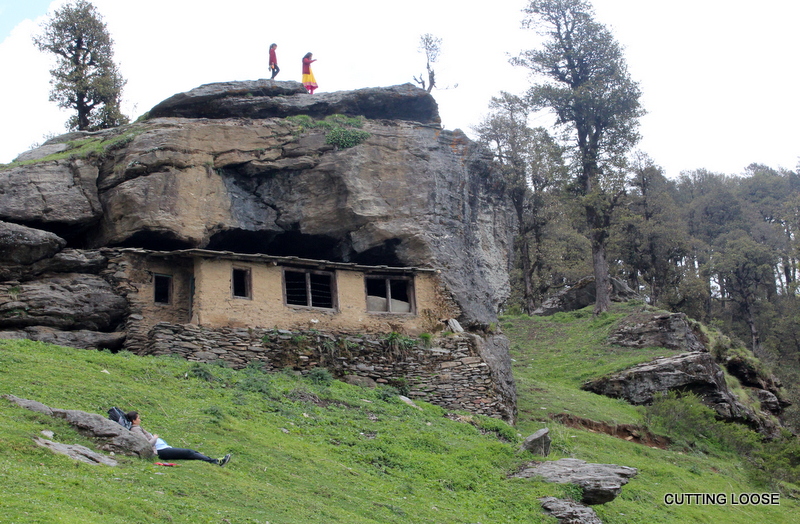 A kilometre or so short of Serolsar a smattering of temporary dhabas make their welcome presence felt. We ended up spending considerable time refuelling on rajmah-chawal, soupy Maggi, and copious amounts of tea before our leisurely saunter back. Knowledge of a rewarding and boozy BBQ awaiting us at Tirthan Anglers’ Retreat no deterrent for our appetites! The hike generally takes between 4-6 hours both ways with the additional four hours to and from Jalori. You do well to earmark an entire day for this outing should you wish to follow suit.