In school, did you ever sit beside a student whose lunch box reeked invitingly of pickle? We all did, I reckon. Not a bad thing, to my young mind, or to an even less astute aesthetic sense. I mean, who cared about oil stains on books and clothes at that stage? We looked forward to school so we could trade lunches. (Okay, I confess, the boys were a big draw, but that came later). My sister and I could never quite understand why anyone would want to trade with us, as our boxes, with boringly sterile regularity, contained nothing but serviette wrapped sandwiches. 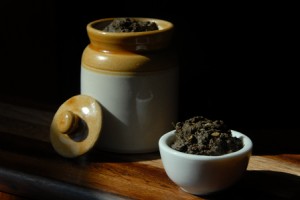 There was no point whinging with the help, as they took their instructions from the lady of the house; who allowed her children the privilege of pickle and paronthas only on their days off from school. The irony of it all was that there was always an amazing array of home-made pickles and chutneys to choose from. The advent of winters found large traditional martbaans, tied at the mouth with muslin, lined up like soldiers to soak in the sun. Mango, lime, ginger, chillies, mixed vegetables—the whole hog, actually.

Which reminds me, there was game, too; pork and venison provided by various kin, in the days when shikaar was not deemed a dirty word. Since the ban, the lady of the house began pickling a much poorer albeit legally permitted cousin, mutton. It is now a much-awaited annual feature. Come winter, and preparations begin by the airing of a dog-eared recipe book covered in indecipherable scribbles. A list is then painstakingly made out, noting the ingredients, their quantities and their longstanding brands. It says a lot for loyalty considering the lady in question is now in her seventh decade.

Anyhow, the meat is ordered fresh from a favourite butchery. Sniffed, washed and dried, it is boiled just so. Then it is fried just so. To ensure tenderness, the fried chunks are covered just so. The oil heated to just the right temperature. The onions ground and the paste cooked to that perfect shade of brown. Ginger cut uniformly into two-inch juliennes. The spices sorted and roasted just so. And… that’s about the time the help begins considering a job change. A small price to pay, I would say, for when the ingredients metamorphose into the most scrumptious pickle ever.

Putting it all together must sound easy but it takes all of three days (and a backache) before you can relish it. It is then equally divided into a certain number of portions and distributed to a Chosen Few. All efforts to reproduce this recipe—unthinkingly referred to as mama da achaar—have come to naught. Those who have tried and failed must believe there is an ingredient being kept from them. They would be justified in their convictions. I believe it is called Love.

Note: A version of this has previously appeared in my HT column ‘Food Street’.