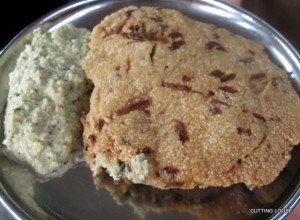 Maddur, a small town in Mandya district in Karnataka, lies between Bangalore and Mysore and is home to one of the most popular snacks of the region, the vade. Eponymous with the town it hails from this is not your typical doughnut shaped one. It is made of rice flour, semolina and maida mixed with sliced onions, curry leaves, grated coconut, cashew nut and masala. The dough is shaped into a patty and deep-fried to an irresistible golden brown.  For travellers along the Bangalore-Mysore highway, making a quick halt for the vade at Maddur is near tradition.

Owners of Maddur Tiffanys claim that their family invented the Maddur vade over a hundred years ago by accident. Doddamane 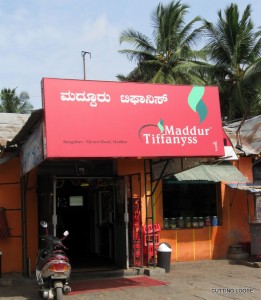 Nagaraju, the proprietor of Maddur Tiffanys shares that his grand grandfather Madvachar, who ran the canteen at Maddur railway station, used to prepare pakodas for train passengers. This one time, a train reached the station ahead of its arrival time. Madvachar didn’t want to lose customers so he hurriedly turned the pakoda dough into vade and fried it. Et voila, the Maddur vade was born. Purists swear by the railway station version, which continues to be a hit with passengers, even though the highway boasts of a number of joints selling this piping hot any-time snack.