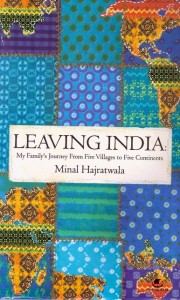 The first thought to enter my mind when handed Minal Hajratwala’s debut book for reviewing purposes was: not another angst-ridden diaspora story, please. However, when I got down to reading Leaving India: My Family’s Journey from Five Villages to Five Continents, it revealed itself to be an illuminating document about the fascinating history of Gujarati’s inhabiting different parts of the world. This nostalgic journey commences at Navsari, a small village in what we now know as Gujarat, returns back to the future, traversing variously, the Fiji Islands, Mauritious, South Africa, the United Kingdom, the United States and Canada.

The author’s quest—to find answers to the many questions she is faced with as the daughter of migrants—takes her back into time, to the beginning of the 20th century. Where do I come from? Why did we have to leave wherever home was? Did we gain any or lose some? Questions that intermittently resurface in the mind of every single migrant. Leaving India is Minal Hajratwala’s groundbreaking attempt at unravelling the answers, as she traverses the globe, discovering how her family came to be spread across five continents within the span of a century or thereabouts.

She notes: “Each time we leave, we must leave something of ourselves behind”. Oftentimes it was families as the males left for greener pastures. In Minal’s case, her great-grandfather left for Fiji, an uncle for South Africa and her parents for the US. She spent eight years tracing her family’s journeys trying to string together their story of migration.

Motiram Hajratwala arrived in Fiji in 1909 and set up a tailor’s shop a couple of years later. Soon after he sent for other male relatives and went on to become the proprietor of the largest department store owned by Indians. Ganda, her granduncle in South Africa, came up with the ‘bunny chow’—curry in a hollowed out bread loaf—during the apartheid-ridden days. It is even today a popular street food there. And her parents, educated professionals, left for the US in the sixties to fulfil their American dream.

Throughout the overarching narrative, the author manages to capture the political sentiment of the time; be it the segregation during the apartheid in South Africa, or the stringent immigration laws of the US. The personal stories of different members of her family are well told as she deftly weaves them into the prevalent political situation. Her own story is expectedly confused and questioning; akin to teenagers globally, yet dissimilar as she grows up in a culturally diverse environment.

Towards the end, she candidly writes about her experiments to discover her sexuality fully while in college. Her forays into same-sex relationships reveal to her that she finds them an interesting concept, although bisexuality was her eventual choice. Her need—and her endeavours—to be accepted by her family, alternate views et al, is also poignantly expressed. Leaving India is more than just the story of Gujarati immigrants. It is, indeed, a saga, narrated by a very talented storyteller.