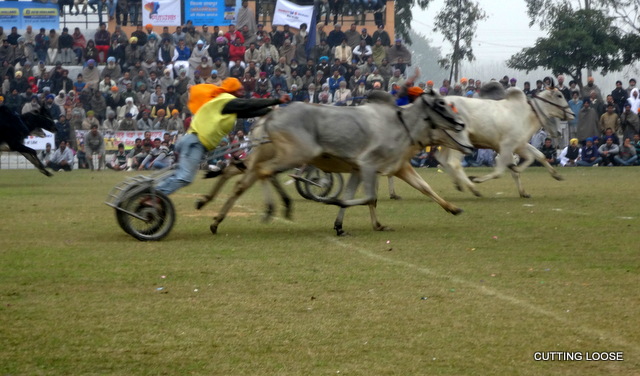 Come February, all roads lead to a three-day sporting bonanza hosted with great exuberance at the stadium in Kila Raipur, yet a part of moffusil India some 15kms from Ludhiana. 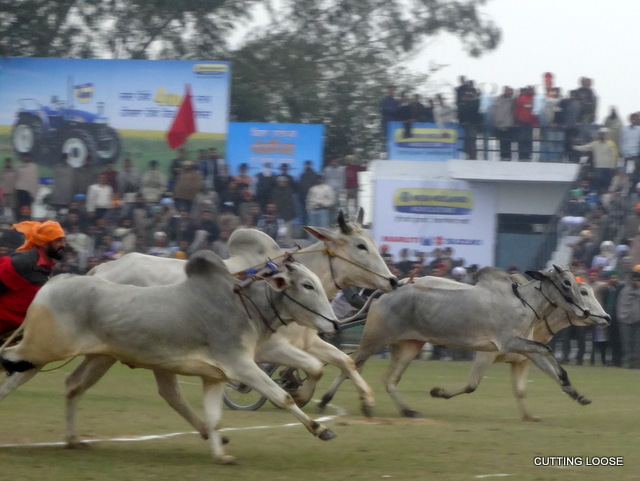 Referred to as the Rural Olympics, it witnesses a turnout of nearly 50,000 each day as household routines, farming chores, wedding ceremonies, political rallies, and much else is set aside to eagerly participate and lustily cheer in well-entrenched sporting tradition. 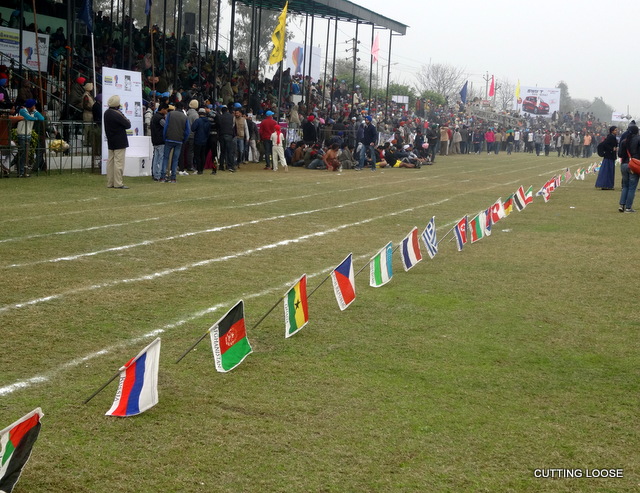 Envisaged as a recreational event for farmers in 1933 by one Inder Singh Grewal, it has, by it’s 78th edition this year, taken on the personality of an international sports meet. Organised under the aegis of the Grewal Sports Association, the festival continues to enthusiastically encourage acumen and endurance in both recognized and rural sport disciplines.

While bullock-cart races remain the star attraction, horse-riding, racing hounds, cycling, and athletics find themselves equally centre-stage. Not least industrial strength shoulders, ears, teeth and hair, sported by beings that employ them well for, you know, the usual car-pulling, cycle-balancing, tractor-lifting and such like. 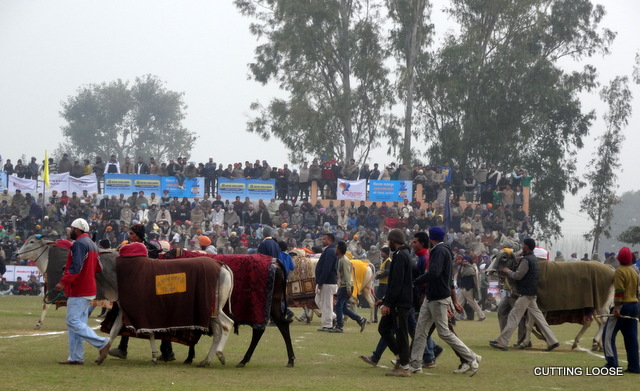 For the bull owner, it is no less than a child much-loved, he will proudly proclaim. Nurtured, fed and spoilt as they are wont to do sons and readied through the year for just this one event. (Fields after all are meant to be ploughed by that other lowly contraption, the tractor).

No wonder then they depend on but a dozen jockeys skilled to take the bull by the horns, so to speak, for the frightfully fast and furious dash across the stadium. Balanced harness-free on the ‘axle’ these astonishing chaps use their fists and loud guttural shouts to urge the bulls on towards a coveted prize; once a kilogram of desi ghee, it now runs into several lakh rupees. 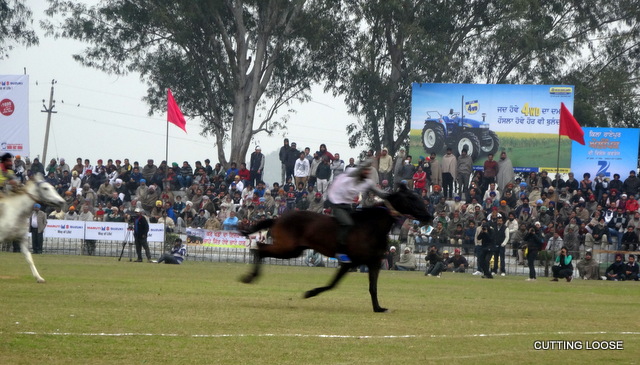 Bare-back horse-racing is one of many equestrian skills on show. Dangerous and exciting at the same time, it pales some before the tricks the colourful Nihangs have up their sleeves.

Here’s one fearless member of the Guru Ki Fauj (Guru’s Army) as he rides simultaneously two steeds standing up. 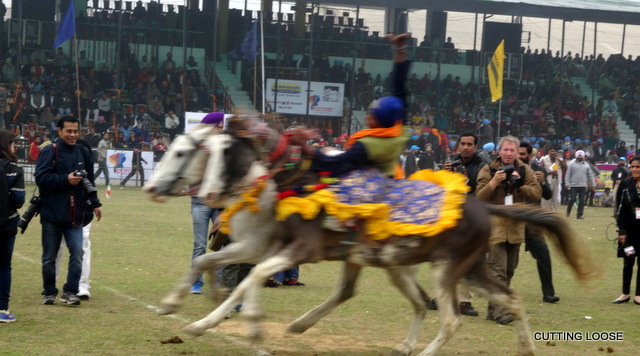 Another reining in a blur comprising two very, very fast horses as an open-mouthed media watches in awe. 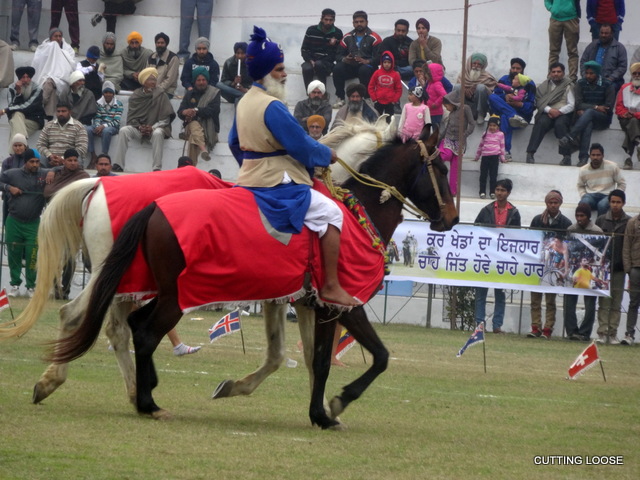 The legendary Baba Maghar Singh, at 66 years, is the cynosure of all eyes, inviting the loudest cheers for the dare-devilry that also resulted in a cameo in Aamir Khan’s Rang De Basanti. He draws his inspiration by performing at fairs and desires to ride four horses simultaneously before meeting his Maker. More power to him, I say! 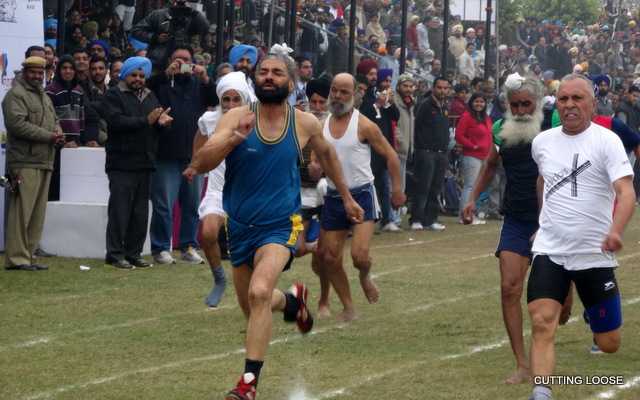 Then again, he isn’t alone. A number of veterans (in the 65 years category) race each other to the finishing line. I missed the 80-year olds as I took off to peer at other curiosities dotting the stadium. 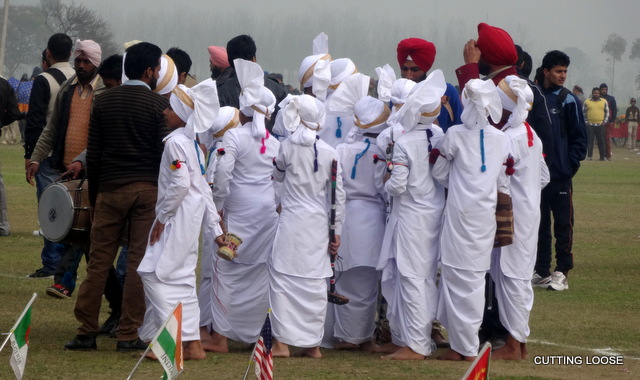 The sparkling whites of young boys in the Malwai Gidha team. For the uninitiated, gidha, the folk dance is usually performed by women. Only in the Malwa region of Punjab do menfolk enact it as much as they do bhangra. 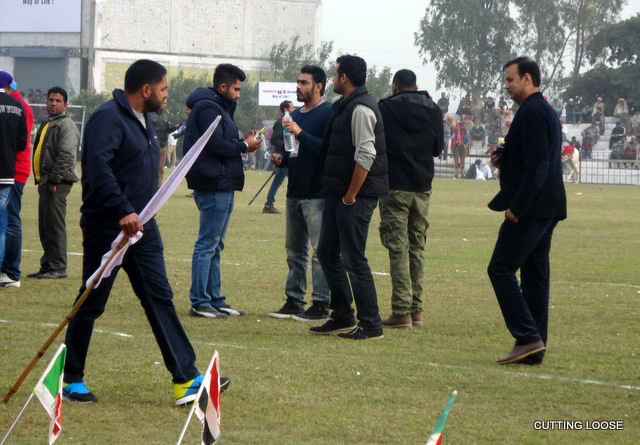 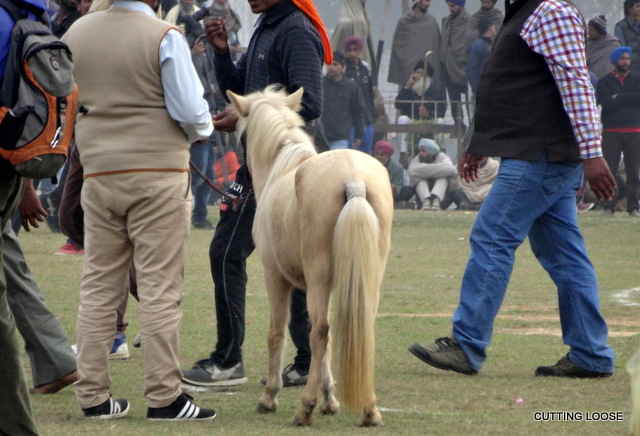 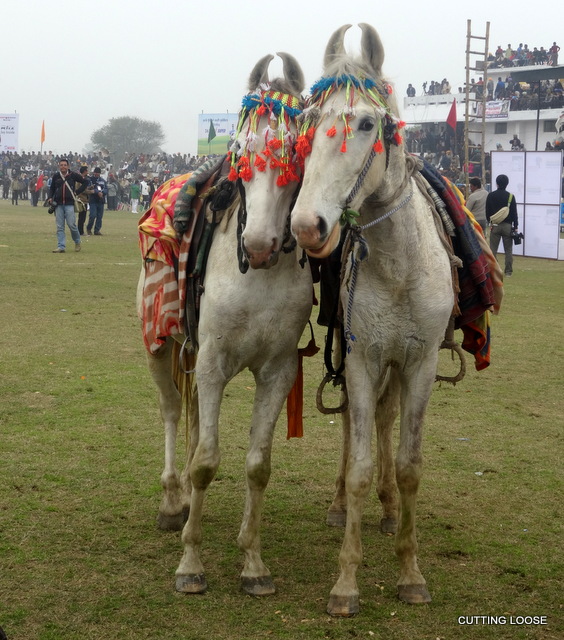 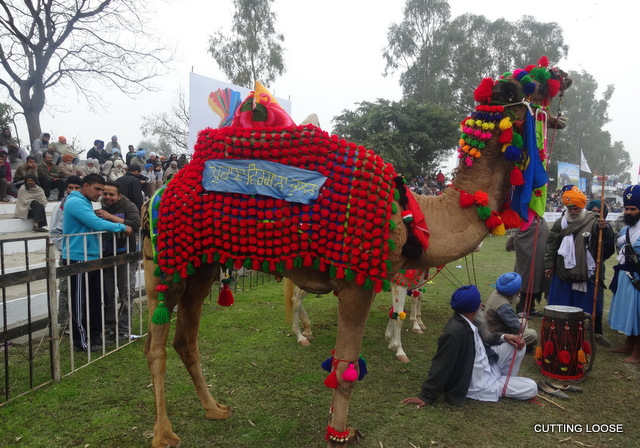 A sloganeering camel calls upon to not forget age-old culture and tradition. 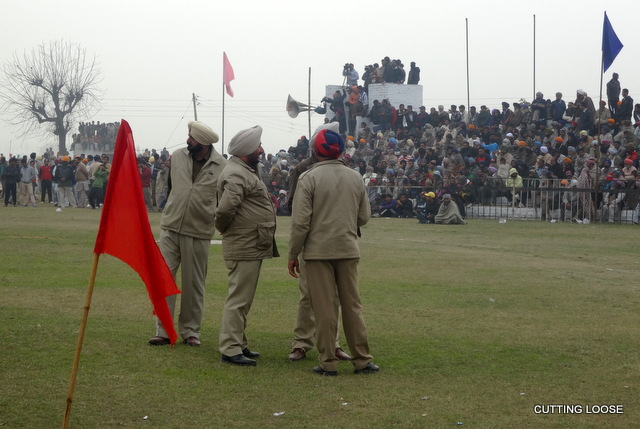 While a well-rounded Punjab Police marks its self-indulgent presence.