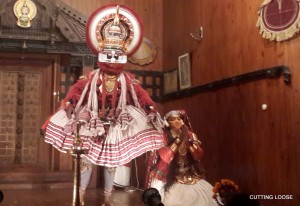 With cyberspace all abuzz with the recently concluded Onam celebrations, and sadya images flooding timelines, I am reminded of another enduring Kerala tradition, that of performing arts. During a fabulously timed visit last month (you know, back in the day when it wasn’t all dry), with an evening to spare, and encouraged by the friendly people at my hotel, I found myself part of a motley audience at the Kerala Kathakali Centre in Fort Kochi. I was in for a two and a half hour session; an hour and half of which was devoted to on-stage application of the elaborate make-up that typifies this story-telling dance-drama from the 16th century.

Early versions of Kathakali relied heavily on ritualistic and other performing styles, 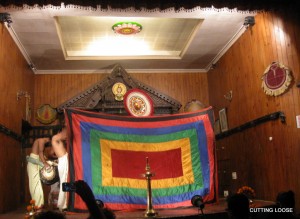 gradually coming into its own when a scholarly and arts-loving Raja of Kottayam decided to dramatise episodes from the Mahabharata, laying a great amount of emphasis on music and abhinaya. This theatrical form under royal patronage attracted some of the finest playwrights, poets, dramatists and musicians of the time. By the end of the 18th century, it had added plays from the Ramayana and Puranas to its repertoire, intricate make-up replaced masks, billowing costumes the coconut frond skirts, and the tirashila–curtain behind which every actor makes a dramatic entry–was being whisked away even within the hallowed premises of the Shri Padmanabha Swamy Temple in Trivandrum. 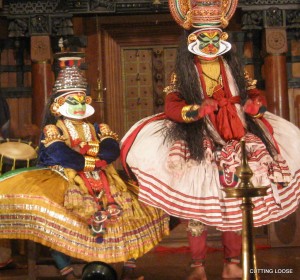 Make-up is as essential a part of the character’s persona as his mudras. (I say his, as typically all characters are enacted by males; females are a relatively new entrant on this stage.)  Indeed, the former enhances the latter. So while paccha (painted green) denotes godly and virtuous, is sported by those essaying a Krishna or Bhima, kathi (red moustache-like patterns outlined in white) depicts evil, including arrogance and anger; you will see it on a Ravana, for instance. Thatti (the bearded look) is what a Hanuman will wear in white and Dushasana in red. Female characters on the other hand use minimal make-up (in comparison)–a uniform fleshy-pink called minukku. They share this look with sagely characters.

Though costumes remain unchanged for good and evil, the size of a bejewelled and 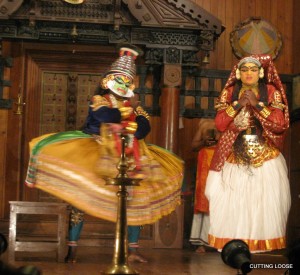 imposing kireetam (headgear) tells an important personage from another. Krishna’s conical one edged with peacock colours, for example, points at his non-royal one. Actors playing women wear a cotton wad on the left of the head; covered with a waist-long veil, it is indicative of hair-dos favoured by Nair ladies in the 19th century. The bulked-up long-sleeved jacket does not just accord a larger-than-life appearance, it also protects against chaffing from the countless wooden ornaments actors carry on the person. Set to Sopana –customarily performed at temple steps– music, these ‘superhuman’ performances are greatly embellished by an orchestra comprising the maddalam and chenda (drums both), chengila (bell-metal gong) and cymbals.