An all too brief meeting recently, with a dear friend returning to Japan, has left me a little richer in ‘spirit’. Along with lunch and affection, I received from her a hamper of Japanese goodies. One of those, served chilled, is what I sip while I write this post. This is a first for me, sharing an experience even as I savour it…

Called Umeshu, this is a traditional fruit liqueur which is aged with the whole ume fruit, its extract, and spirits. The pickled ume, visible in the bottle, appears to be a cross between a plum and an apricot, is neither, and has a citrusy flavour to it. Since the language on the label is, well, Japanese to me, the only recognisable feature is a heart warming 14% lost amongst the sea of kanji. The effects of which number are manifesting themselves in the best possible way.

I learn that only the finest, fully ripened ume are picked and preserved within a day of harvesting. Then, a year of natural 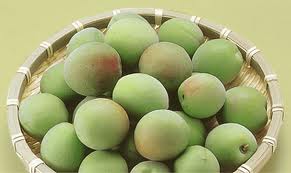 fermentation, extracts from them the delicate sweetness, and juice-like fruity flavor that I am relishing right now. A few sips into the drink will soon get your olfactory sense used to the overwhelmingly sour aroma, which dissipates, in any case.

Considered a healthy drink by the Japanese, it has found mention in ancient documents related to pharmacy, soon after it was introduced from China in 500 AD. Its medicinal properties are many and it was recognized, way back in the 17th century, as an agent that arrests accumulation of phlegm, relieves sore throats, improves appetite as well as dissolves poisons. The list of benefits is long and frankly, if you want more information than this, you could very easily just go here.

While l go back to enjoying my delightful umeshu unhindered. Kanpai!