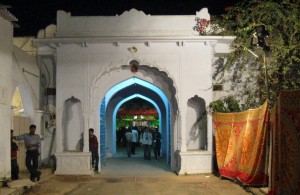 Last weekend I made a mad-dash for the Jaipur Literature Festival with fellow-author Khushwant Singh (not to be confused with the man in the bulb). It was a spur-of-the-moment decision, made Friday evening, to leave early the following day in order to make it to our destination by late afternoon.

event of the day; Kabir Bedi announcing the first DSC (sponsors of the festival) prize for South Asian Literature to HM Naqvi for his Home Boy.

Our bone-weary arrival also coincided beautifully with the beginning of a festive evening,

replete with colour, bright lights, wine and song. A couple of beers later we were one with the happy milling crowd as we cheered, sang and danced along with the eclectic performances around us. Omar Bin Musa, the rapper of Malaysian-Australian heritage was followed by author Ali Sethi’s poetry and his rendition of ‘aaj jaane ki zid na karo’, more famously associated with Farida Khanum. 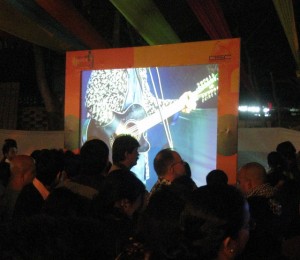 The crowds went into a bit of a tizzy with the arrival of the iconic pop-star from Pakistan, Salman Ahmad of Junoon. Having earlier in the day read from his novel, Rock & Roll Jihad, he went on to entertain with songs of joy and healing; ‘saiyonee’ reverberating endlessly to popular demand.

He gave it up for Bant Singh, singer of revolutionary poetry, and a Dalit icon from Punjab. Following the successful conviction of the Jat rapists of his minor daughter, he was beaten mercilessly, losing his legs and an arm to amputation. Famously mouthing, “They have not cut off my tongue, I can still sing”, he continues to render songs of social justice and change. Growling stomachs hastened our departure from the festival just as Sufi singer Madan Gopal Singh was signing off. 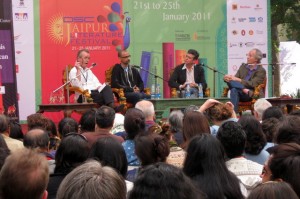 hosted around the Palace grounds. The first to interest me was the discussion in the Front Lawns about the dying American novel. Moderated by British writer, Martin Amis, this enlightening debate included Pulitzer Prize winning American novelist Richard Ford and Jay McInerney, novelist, wine columnist and screenplay writer along with Junot Diaz, best-selling author of Drown, a collection of short stories.

Returning post-lunch with a local friend, I about glimpsed from the sidelines the exchange between Nobel Laureate JM Coetzee with historian Patrick French. Before hurriedly scurrying away to find a spot under the Mughal Tent to take in some Swedish crime fiction; godfather of the genre, Henning Mankell himself, in conversation with fellow Swede, Zac O’Yeah. Creator of the Kurt Wallander Mysteries, he had the audience in splits with anecdotes from his own life as well as that of his chief protagonist. It was a heartening revelation that writers’ experiences and expectations are the same everywhere; irrespective of age, gender, genre, geographical location, popularity.

That evening, many tiny kasoras of tea, and the launch of Mita Kapur’s The F-word later, 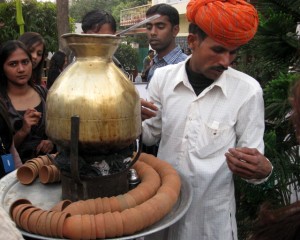 we headed back to Delhi comparing notes. Undoubtedly a success, evident in its teeming visitors, well-crafted and well-attended by literary figures from across the globe, the most enduring flavour was the wholly democratic nature of the five-day event. No earmarked seats for anyone, I repeat, anyone, in the audience; informality being the order of the day. Accusations of racism notwithstanding  – there certainly were more American and European accents than Indian – the festival was quite an eye-opener for someone used to the all-pervasive, equally undemocratic (now that’s an oxymoron, if ever!), beacon culture of Chandigarh.