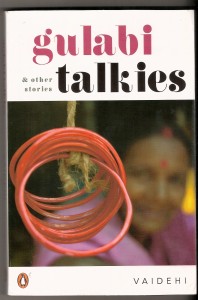 Vaidehi is the pen name of noted Kannada writer Janaki Srinivasa Murthy. She is hailed by critics and readers alike for her prolific short stories, poems, plays, biographies and translations. Her deep and compassionate understanding of the inner world of women allows her to meaningfully mirror the ordinariness of their lives and yet, eloquently depict their resilience in the face of sorrow and poverty.

Gulabi Talkies is a compilation of twenty of her short stories written through the eighties and nineties with pastoral South India as a backdrop. Edited by Tejaswini Niranjana, these stories have been translated into English by Mrinalini Sebastian, Bageshree S., Nayana Kashyap – Vaidehi’s Madekeri-based daughter – and Tejaswini. Most of the stories convey, through Vaidehi’s celebrated naturalness and wry humour, the female experience, that manifests itself in the daily lives of these women in a distinctive fashion. Through this book, a varied readership will be introduced to a barely-glimpsed, nearly forgotten, rural life; the characters’ preoccupations and their pace of life – nothing short of an anachronism from another time.

The opening of a cinema hall called Gulabi Talkies, in the story by the same moniker, facilitates not just in the transformation of an otherwise sleepy village into a small town, but also that of a midwife into a gatekeeper. In Just a Box, the protagonist invites ridicule and an onslaught of unsavoury rumours in her quest to acquire an old chest, at any cost, from a fellow villager who is hell bent on keeping it from her… at any cost. A young girl causes a flutter when she gaily confesses to an elder neighbour her desire to live the life of a prostitute in Chandale. All of the writer’s characters reach out for understanding and support, whether it is the wilful Ammachchi in Remembering Ammachchi, the thieving Bachchamma in Tale of a Theft or the dedicated Ahalya of Dependants. The stories, themselves, are portrayals of sensitive societal narrative.

Vaidehi’s chosen language of expression is a little-known dialect – she is well-versed in standard Kannada, too – as it is the speech of the region she is depicting. This makes her characters appear all the more distant, culturally. The translators, who don’t inhabit the world of the characters and lead urban lives, have evidently tried to put together a remarkable piece of work that loses nothing in translation. Nevertheless, there is a feeling of regret, as one puts down the book, at linguistic limitations and, therefore, the inability to read Vaidehi in the Kundapur dialect.