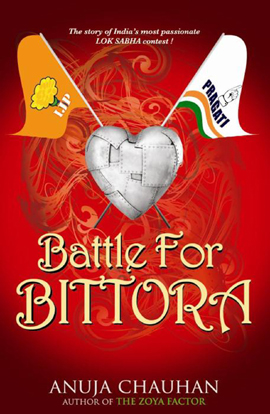 Anuja Chauhan’s second book, Battle For Bittora, will make you LOL (laugh out loud). Crafted around the Lok Sabha elections, this romantic comedy brings to the reader a rather “cute” (if I may) version of the Great Indian Democracy, by marrying politics and pop-culture. Draped in humour, this book makes for a rather fine reference as to how the young view life today. With her characteristic wit, the author manages to successfully infuse the shady goings-on in politics with an element of “cool”.

The author’s strength lies in her characters: quite lovable, oftentimes quirky, but mostly funny; generous in their use of Hinglish and mispronounced English. Jinni, Sarojini Pande, a city-bred independent girl, happy in her world of animated “kitaanus” is suddenly para-dropped into the whirlpool of Indian politics. She is pitted against childhood friend-cum-almost-love, ex-royal Zain Altaf Khan, for the affection of the people of Bittora. Her crack team consists of Gudia aunty, a vodka-sipping election agent; Tawwny uncle, a family “frenemy”; and the ever-servile Pappu.

Matriarch Pushpa Pande, “who has gaps in her teeth wide enough for a five-rupee coin”, is decidedly the feistiest of the bunch. Poll-hardened and determined to win, she plays her granddaughter’s campaign manager. Draped in cotton saris, all set for the new endeavour, Jinni and Ammaji work hard to meet people, go campaigning and make all efforts to win their votes. But, as we all know, elections in India are not won without propagandas, corruption, betrayals, horse-trading, accusations and blame-games. Anuja Chauhan manages to expose the malicious truth of electoral battles laced with her inimitable sense of wicked comedy.

As stories go, Battle For Bittora is pretty predictable, even though you draw that conclusion with a grin on your face. Her descriptions of the nitty-gritty of politics, as also electoral theatrics, are made with the ease that comes with comprehension. Being politician Margaret Alva’s daughter-in-law, Anuja Chauhan is privy to political affairs like none else. No marks for figuring out the “Grand Old” Pragati Party with the tricolour on its flag and the IJP’s (Indian Janata Party) saffron flag with a marigold on it. The author spares none, making you chuckle with her references to easily identifiable leaders.

It is a light-hearted book with no illusions of grand sentiment and has possibly been written with an eye on celluloid trends. Given that the author’s debut novel, The Zoya Factor, has been contracted for a film, the filmi-speak peppering the book can be easily explained away. However, the entertaining narrative pales in the end due to repetitive sequences. The multi-lingual word play (mosquitoes bhin-bhinnaoing) and oft-mouthed incorrect English by characters (“nave” for na`EFve) begin to trip you once too often in an otherwise crisp read. In a sense, Battle For Bittora is a lot like the characters inhabiting its pages: funny, imperfect, and with a tendency to lose the plot now and then.

NOTE: This review has appeared in The Tribune today.